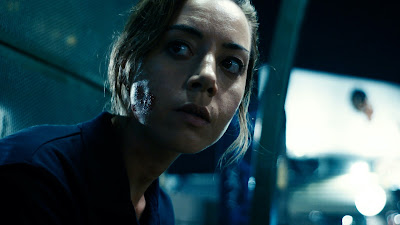 Mainly known for her part in the popular American sitcom Parks & Recs, American actress Aubrey Plaza has also carved herself an interesting career in the indie world, eschewing the sirens of big studios for some really interesting parts in films such as Safety Not Guaranteed (2012), Life After Beth (2014), Ingrid West (2017) and now Emily the Criminal.

The premise could be one of a black comedy: a young woman who is struggling financially and stuck in the gig economy embarks on a life of crime. Except that it is nothing of the sort. Nor does the film attempt to glamorise life on the wrong side of justice, far from it even! John Patton Ford does not even try to go all A24 on us and deliver a high octane, stylised crime odyssey.

That is not to say that Emily the Criminal is not tense, in fact a few scenes with Emily way over her head with some professional gangsters set to end badly from the start and everything that can go wrong does go wrong, giving the recent Uncut Gems in run for its money in terms of stressful set pieces. Unfortunately, and in one of the least successful aspect of the films, she is somehow mentored by Youcef (Theo Rossi), a "kind", well meaning criminal, a character who, despite the best effort of the actor, does not comes across as particularly believable and feels more like a plot device.

The film is more skilled at the portrayal of Emily as a complex, broken character however. While at first it appears the film is about to succumb to the millennials vs boomers trope favoured by so many freelancers seeking to whip up some online frenzy, it has more depth and nuances than that. The film does point out how shaky the job market has become and has remained so for millennials and in a hilarious scene, Emily has a bigger meltdown than strictly necessary when during a job interview for a coveted position, it emerges the most basic provision such as a salary are not offered (and Gina Gershon is brilliant in a cameo in that scene!). It is also clear that she does not always help herself, with some past issues a stain on her record and perhaps the lack of drive and focus her school friend has, who did manage to secure a job in a desirable industry.

Yet the film does not judge her and as she takes more steps in her criminal career with the not so victimless branch of credit card fraud. Crucially, thanks to a committed a layered performance by Aubrey Plaza, a certain mystery about Emily's personality remain which makes her come across as so human and so compelling, a young woman still immature for her age at times but who can also tackle some life threatening situations with a bravery she might not have suspected.

Emily The Criminal is a smart, unpredictable and at times captivating drama that is also a showcase for Aubrey Plaza's acting talent. It should do well on the indie circuit.

Emily the Criminal screened as part of Sundance 2022.