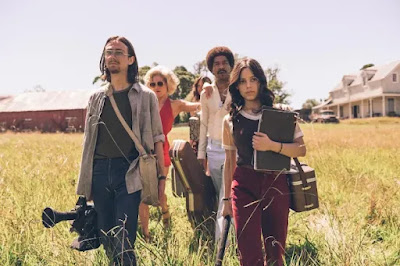 If the slasher film has slowly creeped its way back into horror in the 2020s with the Fear Street trilogy, Halloween Kills, Malignant, and the Scream re-quel, then it has announced it is here to stay with Ti West’s Texas-set mashup of porn and horror cinema. Promising a body count that revels in the history of the slasher film and delights in the filmmaking process of the porn industry, West’s film is about the blurring lines of these two lurid types of film — and how they’re deeply American enterprises.
“I will not accept a life I don’t deserve” is a repeated phrase, which acts as the film’s creed and in an ironic twist also acts as the motivation for its killings. To a repressed villainy that lashes out as jealousy, if you have a life that “I” no longer can have, you don’t deserve it. In America it is all about ME! Horror has always excelled at channeling the ID, and in turn has always struck me as the most visceral and revealing of genres – certainly the most confrontational about social repressions. Specifically in American slashers there’s a Calvinistic strain of strict religion that punishes its youth with an old testament fury; ironically it’s this type of religious establishment that takes issue with horror films. It’s this tension, burrowed in the ID, that makes horror such a cathartic experience that has always terrified and angered audiences. X — with its meta film inside a film and constantly playing daytime religious television — is in tune with that tension. The “Boogie Nights meets The Texas Chain Saw Massacre” packaging textually makes sex and violence an entanglement of social repression attacking hippie youth and social progress.
In the mold of classic slashers we’re introduced to archetypal figures: the nerdy filmmaker (Owen Campbell), the snake oil salesman producer (Martin Henderson doing a wonderful McConaughey impression), the blonde bimbo (Brittany Snow), the jock (Kid Cudi), the quiet girl (Jenna Ortega, having recently appeared in Scream), and the mysterious “can’t quite get a read on her” scream queen in Mia Goth’s Maxine — the film’s central figure of ambition and jealousy. Each are likably performed and thread the needle of enjoying their presence, but not so much that you hate to see them die. The characterizations aren’t specific enough to pull this off, but there’s a subversion to these archetypes in which the morally “bad” characters are “good” during tense circumstances — and vice versa. Most exemplary of this is RJ (Campbell), the director of their porno film who has ambitions to make this feature with the craft of 70s European art cinema, but when his shy girlfriend, Lorraine (Ortega), expresses interest to perform in this “elevated” porno he takes moral issue and looks down on her. Jealousy and fear of sex snarls its ugly head at such moral highgrounding in X. One wishes that West might have further pushed this ironic idea of our surface desires being more complicated than they seem.
The first half, which I found more tonally coherent and cleverly written, is a slow burn delighting in the joy of moviemaking, no matter the size, genre, or quality. West calmly lays the groundwork for the second half where grindhouse sex and violence slash each other. Penetration, whether for blood or lust, is the same in the eyes of American religious zealotry. West’s split screen editing and cross cutting marries the two primal forces, gleefully mixing and matching the various climaxes, so to speak. These two genres are both stuck in a nightmare fighting for the American dream.
As the bodies rack up, X has tension, but never reaches the terrifying. A sympathetic view of its slasher figure and how aging and sexuality is a driving force of repression is thematically a fresh take on the genre but renders its scares and kills rather tame. The film’s generational warfare has a possibly muddled and ugly view of old age; it wants to be nasty and is also not quite perceptive enough to warrant the empathetic display. It’s the clumsiest part of the film and also where the gnarliness emerges from, which ranges from surprisingly gruesome to convenient. While playful in its doling out of bloodshed, there's a nagging diminishing return to how the film twists itself into a generational duel of jealousy. if it never coheres in a way that’s completely satisfying, it is at least a hoot to watch it nastily chew on these meaty ideas.
A new classic slasher villain or film this does not birth, but its appreciation of the genre is felt aesthetically throughout. There is a confidence — refreshingly not a self-conscious artfulness — to the framing and editing of both the porno moviemaking as well as the blood-soaked deaths. West avoids an ironic winking eye and understands the formulaic power of trashy material does not need to be elevated — just cooked with sincere ingredients. West and DP Eliot Rockett have a sense of composition that relishes in the beauty of the dirty with patience; the slow pacing of the film is a virtue. Playing like a greatest hits of slasher films, it is a treat for the eyes and opens a treasure trove of tropes rarely present in the last decade of horror. While this film is not the modern horror opus it briefly threatens to be, there’s a handsome level of craft earnestly echoing the ancestors of blood and lust cinema. Something of a return to form for Ti West, X excels as an exuberant ode to low art, to picking up a camera and telling a story, to a hidden corner of the American dream that is integral to cinema’s history.
Review by Andy Zachariason.
X. Directed by Ti West. Starring Mia Goth, Jenny Ortega, Martin Henderson...
X is currently out in cinemas.
at 22:17