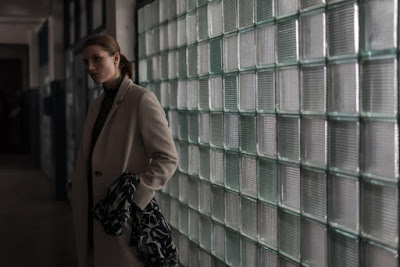 Andrey Zvyagintsev made an impact in Cannes in 2014 with the bombastic, Kafka-esque nightmare Leviathan, and walked away with the award for best screenplay. He is back this year in competition with Loveless (but then you'd expect his new film to be called Loveless).

In Loveless, Zhenya (Maryana Spivak) and Boris (Alexey Rozin) are going through a messy divorce, having both found a new partner already. Their son Alyosha is the last "detail" to be sorted before they can move on with their new lives, but in the midst of a particularly acrimonious fight, he vanishes (not that they even notice at first!).

Eastern European cinema is sometimes caricatured as being a dour misery fest, yet the Russian film is much more assured and balanced. Its main quality is how realistic it all feels for all its darkness, none of the events feeling particularly over the top or laboured. That is not to say they are not gut-wrenching. The bitter divorce and ensuing pettiness between Zhenya and Boris are painful to watch. In a chilling scene, Zhenya is quietly contemplating scheming up to make her husband lose his job, purely out of spite. There is no bunny boiling, no outburst of physical violence, just the cold harsh reality of a loveless marriage disintegrating in front of us, in a way that feels very relatable and universal.

Boris's selfishness is apparent to all who know him, except for his new partner, already pregnant from him, and most probably destined to be casually dumped once he gets bored of her, his usual cycle according to his wife. As for Zhenya, she is materialistic to the core, having already found a new, wealthier partner and the director film their sex scenes as a way to highlight the gorgeous but cold designer interior rather than their actual bodies. There is a hint as to how Zhenya came to be that way when we meet her estranged mother, as the couple suspect their child might have seeked refuge there. The old matriarch is a monument of cynicism and misanthropy, with her foul mouthed tirade the only scene that comes close to dark humour, punctuated by a cat meow, just to hammer down how little the woman wants to have to do with actual people.

It is not just the couple that the director has in his sight. Through Boris's issues in his nondescript corporation, we understand how hypocritical and conservative Russian society is, where lies and masquerades are acceptable and even encouraged as long as appearances are kept intact. As for the police, it is shown as jaded and indifferent, forcing the parents to rely on a charity to lead the investigation.

For such a dark film, Andrey Zvyagintsev has a real visual flair, perfectly reflecting the mood of each scene and conveying Russian society's bleakness too, through a colour palette that reflects corporate soullessness and wintery urban isolation.

Loveless is not an easy film to "enjoy" (coming out of it, I called it 'Everyone Says I Hate You"), but it confirms Andrey Zvyagintsev's position as one of the leading voices of contemporary Russian cinema.