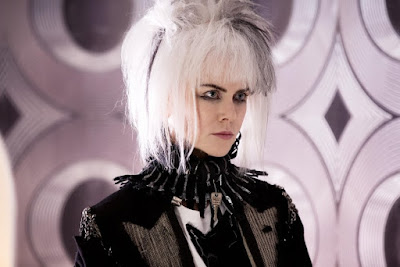 A sci-fi comedy set in Croydon in the 70's with Nicole Kidman as an ageing punk called Boadicea? When that was announced, I was first in the queue! Then I realised who the director was, and I winced, but kept faith. None of John Cameron Mitchell's films have worked for me, and he often seems to hide his lack of talent behind a strong, flashy premise (Hedwig) or graphic scenes (Shortbus).

In How To Talk To Girls At Parties,  adapted from a short story by Neil Gaiman, a trio of young punks led by Enn (Alex Sharp) is invited to an afterparty in a house after a concert, populated by strange dwellers whose unusual antics make the boys think they have come across a cult at first. Little do they realise that they are actually aliens, and one of them, Zan (Elle Fanning), wants to break free from her world of conformity, embracing Earth and falling for Enn.


First of all, abandon all hopes of How To Talk To Girl At Parties being the British equivalent of cult classic Liquid Sky (1982), despite what the premise might lead you to believe. It has none of the sophistication, visual flair and genuine oddness. The film goes for British sitcom vibes and lads banter instead. It might be set in the world of punk, allegedly, but it feels more like the fancy dress equivalent of punk by cheeky students. Which is fine as the film is obviously a comedy (or tries to be anyway). In fact, talented film critic John Bleasdale perfectly described it as The Inbetweeners of punks. So expect some superficial punk shenanigans such as shouting, throwing stuff and, you know, being punk and fighting the system, or whatever. One of the lads has the kind of obligatory, salt of the Earth mum who embarrasses her son with "hilariously" inappropriate comments, a tiresome staple of British comedy.

As for the sci-fi side of it, oh boy. Again, the film goes for a British 70's TV series vibe, with the aliens looking straight out of a Dr Who episode of that era. It does not work at all however, and the whole concept is totally misguided. Indeed, it is hard to believe that legendary costumer designer Sandy Powell was involved, as the cringe factor is very high and the costumes rather ugly, colourful perhaps, but just plain embarrassing. The aliens look like they belong to some new age cult whose members just wrapped themselves in fur, latex and whatever flammable material they got their hands on, with some bogus mystical mantra, and doing some frankly weird circus acts. There is also a surprisingly complex (read: boring) political conflict between all the different factions within the alien community that jars with the tone of the film. 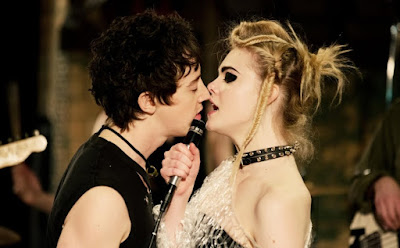 Thankfully, a few genuinely funny scenes remain, including an attack of the alien's house/base by a bunch of punks, and an improvised punk song rendition by Zan, both having the kind of energy the rest of the film so cruelly lacks.

Elle Fanning and Nicole Kidman are also the film's saving graces. The former, as a fish out of water, with scenes echoing Earth Girls Are Easy, shows some great comedic skills and looks like she is having the time of her life. As for the latter, she gives all she has, with a hilariously pantomine-like performance, looking like Cruella De Vil meets Siouxsie Sioux, and hamming it up like there is no tomorrow. One can only dream of a spin-off with her character.

The problem with John Cameron Mitchell is that he wants to be Todd Haynes (for the queer sensibility) and Gregg Araki (for the colourful, pop-art visuals) but he is just John Cameron Mitchell. How To Talk To Girls At Parties is often dull, at times embarrassing, with only its cast to redeem it.

Rating: ★★☆☆☆ (one star for Elle Fanning, one for Nicole Kidman)