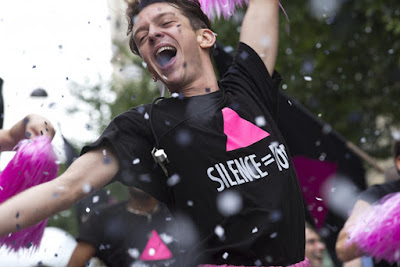 120 Battements Par Minutes is an ensemble film about Act Up Paris in the early 90's, and it is hard to believe that the true events depicted in 120 Battements Par Minutes happened nearly 20 years ago, considering how much has changed. AIDS is no longer the death sentence it once was, in developed countries at least, and in particular, activism. In our days of social media, we forget how difficult it once was to be heard outside the usual, controlled channels. This is this activism that is so meticulously and accurately portrayed here, the story of Act Up, and their fight. The director is careful to show that while gay men were the most affected group, it is an illness that strikes indiscriminately, with teenagers and middle aged women among those members of the reunion affected.


Unlike many of those social David versus Goliath stories, everybody agreed, be it the successive governments in France or the public at large, that finding a cure for AIDS and helping patients had to be done. However, the film clearly showed that most did not want to address the issues head on, they were uncomfortable with this illness and the social groups that were the most vulnerable to it. There was actually a charity in France that was dealing with the AIDS crisis, but one that was far too timid. Act Up made some noise, they wanted rapid action, they did not want to be swept under the carpet like a dirty secret, and most of the activists suffered from the advanced stages of the illness, and simply did not have time to wait. The opening of the film, as one of Act Up reunion begins, chillingly remind us, as a member reads out the names of those who had succumbed, how many, often in the prime of their lives, were dying.

So without the internet, they had to find ways to be seen, and heard. The film depicts those scenes of direct action with a chilling intensity, almost like a war film in the heat of the battle: the invasion of a pharmaceutical company, throwing balloons filled with blood everywhere, demanding that clinical trials were rushed and offered to those who could no longer wait, and faced death, or storming a TV programme live, making as much noise as possible. 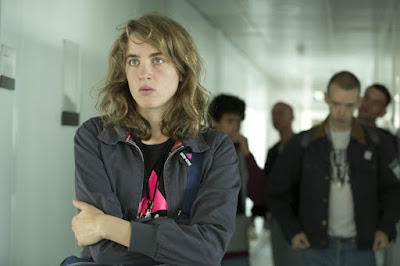 A later scene in which the group storms out a college, delivering an impromptu lecture on AIDS and how young people should protect themselves is a timely reminder how for many, the illness was something other people would catch, and the education system was too afraid to raise the subject.
Not everybody within the gay community approved of those strong tactics, and it has to be said that Act Up at times perhaps crossed the line. They were disagreements within the group itself, and not everybody is depicted as a saintly victim, far from it.

While the Act Up reunions take up the bulk of the running time (and one might argue those could have been tightened slightly, a scene in which a member patiently explains how to send a continuous fax had me grabbing the fast forward button), the film slows down, the anger subsides as the director closes up on a burgeoning romance between two members, Sean (Nahuel Pérez Biscayart) and newcomer Nathan (Arnaud Valois). Among all the furore, that romance is like a balm on our woes, even if they live it on borrowed time, with one of them being consumed by the illness.

Robin Campillo handles the romance beautifully, and the intimate scenes are among the most truthful and realistic ever portrayed on screen, with their warmth, urgency and love, graphic yet never gratuitous.

With 120 Battements Par Minute, Robin Campillo evokes the urgency and anger of an era still present in our memories, and we have found our first serious contender to the top prize.