Cannes 2017 - Marlina The Murderer In Four Acts by Mouly Surya 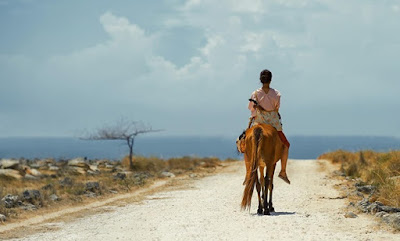 Despite Indonesia being the fourth most populated country in the world, its cinema has rarely made much of an impact outside its borders, and with Marlina The Murderer In Four Acts by Mouly Surya, which just screened at Director's Fortnight, this is only the third time the country has had a film in Cannes in any strand, and the first in twelve years.

Marlina (Marsha Timothy), a recently widowed woman living in a small house in the arid countryside of Sumba Island, is attacked by a group of men, only for her to take matters in her own hands by killing them all in self-defence. She sets on a journey to the police to report the crime while the rest of the gang goes in her pursuit.

Marlina is rather difficult to put into a particular genre, being a mishmash of many of them: a western, a revenge film, a feminist social commentary, a comedy, with a twist of supernatural. The technical skills are immediately apparent however, with the director shooting her film in a wide ratio and with gorgeous colours, and making the most of her location rarely seen on screen. Set on Sumba Island, far from the usual rainforest and lush vegetation found is most of South East Asia, its plains, small hills and sun burnt vegetation gives the film the perfect setting for a western indeed.

The premise might make it sound like Kill Bill but despite some machete action and graphic beheadings, Marlina is nothing like that usual exploitation cinema's fantasy, the deadly female avenger. She might have drawn a short straw in life, but she is resilient and resourceful, and hilariously deadpan too. Having made the decision to go to the police after the initial assault, her entire journey sees her face male violence and incompetence, and she spends a lot of the running time with a face that looks like she is perennially disappointed by men, who boss her around (in the opening scene, her assailants order her to cook them a meal before attacking her!), or are unable to help when she needs it. 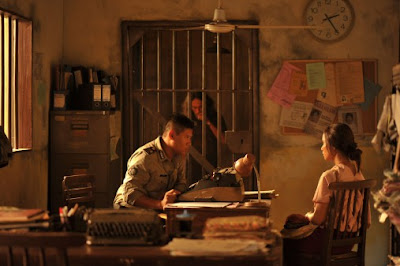 She is joined on the way by a heavily pregnant friend, eliciting some of the film's funniest moments thanks to some female banter (although there is a certain gallows humour to it, as we understand later her friend is under the control of an abusive husband).

There is also a touch of the supernatural to the story, as the headless ghost of one of Marlina's victims materialises throughout her journey, which adds to the oddness of the film.

If the film might sound like a charge against men however, it is never heavy-handed, instead it is a celebration of female empowerment, friendship and determination. As such, for all its strangeness, I can see it meeting an audience outside Indonesia.