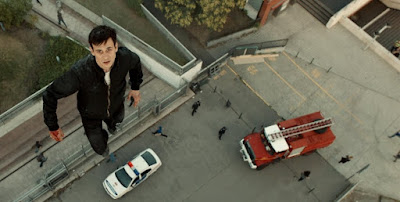 Hungarian director Kornél Mundruczó made a big impact at the Cannes Film Festival 2014 with White God, which screened in the Un Certain Regard , and winning the sidebar selection's award for best film, a parable like nothing we had seen before, about a dog apocalypse with a social undercurrent. He now graduated to the Cannes competition, with the intriguingly named Jupiter's Moon.

In Jupiter's Moon, Aryan (Zsombor Jegér), a Syryan refugee, tries to make it to Hungary and gets shot near the border, only to find himself with the ability to fly as a result. He soon forms a partnership with corrupt doctor Stern (Merab Ninidze) who sees a way to make a quick buck out of him as well as a redemption for a recent professional fault, while the police is on their tail.


You cannot blame the ambition. I cannot seem to remember any recent Eastern European social parable/superhero mash-up. You cannot be more topical either, with the refugee crisis looming in our collective conscience. The Hungarian director embraces many themes, and seems to have a lot to say, the problem is it is often confused. The religious undertones feel heavy-handed, and the message about the guilt that the entire Europe should feel, through the character of Stern, is not exactly subtle. In fact the film lacks the lightness of touch of White God, which conveyed its message in a much more interesting way.

Interestingly, the best aspect of the film is the craft. Kornél Mundruczó has an incredible visual talent, even more in evidence here than in his previous films, conjuring up some striking imagery, as well as visceral action scenes that are miles away from the CGI heavy, overtly edited modern films (the climax in a hotel would put to shame most American superhero films). One has to wonder how long it will take until Hollywood snatches him!

The title is open to interpretation, but I suspect the easiest one is to consider one of Jupiter's Moons called Europa (!), which is said to potentially harbour life while being subjected to the immense gravitational force of its planet. Perhaps Kornél Mundruczó is trying to tell us that there is hope and life among all the crushing drama unfolding in front of your eyes.

Uneven and not fully accomplished, Jupiter's Moon remains a must see for its incredible visual prowess and singularity.