Cannes 2017 - Based On A True Story by Roman Polanski 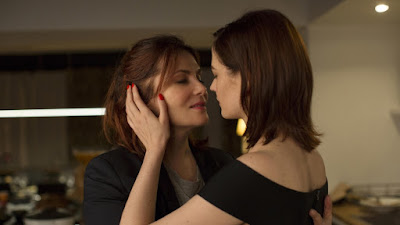 There are usually two reasons why a film by an illustrious director might find itself out of competition. It can be at the request of its director (Woody Allen has patently refused to be in competition all the times his films have been in Cannes), or it can be than it is not felt to be strong enough for the competition, but still deserves a spot for its star studded cast, and it is probably the case here, not strong enough being an understatement.


In Based On A True Story, based on a bestselling novel by Delphine de Vigan, Delphine Dayrieux (Emmanuelle Seigner), a celebrated novelist who had a hit with her previous book, an autobiographical novel about her now deceased mother, suffers from the media circus related stress and exposure, as well as a certain guilt from having seemingly exploited her mom's life. To make things worse, she is also hit by a major case of writer's block. She meets fan Elle (Eva Green) at a book signing, who slowly but surely takes over her life, while Delphine's own intentions towards Elle are not so noble.

Based On A True Story starts off promisingly, as a kind of glossy and slightly naughty thriller, with echoes of Single White Female as well as his own Bitter Moon. We lament the quality of blockbusters in cinema, but the world of publishing is equally guilty of releasing books that attract the lowest common denominator and chasing profits, a world that writer Delphine De Vigan knows and describes well, with several blockbusting books under he belt, and the autobiographical elements in this story are easy to spot.

For all her success, Delphine feels lonely (she recently separated) and misunderstood, so having Elle come into her life and seemingly understand her and even give her a different kind of attention to the one she receives from the public is most welcome. Of course it quickly emerges that Elle is not the most stable person from a psychological point of view: from her rapidly escalating controlling personalty, to her access of random rage (Eva Green smashing a malfunctioning juicer with a rolling pin is one of those involuntarily scene that elevate films as camp classics). The relationship between the two women is the most interesting aspect of the film, at first anyway. Far from being put off by Elle's increasingly disturbing attitude, Delphine sees her way back into inspiration in her, not to mention, as is left for the audience to decide, a certain romantic thrill.

Sadly, the film soon looses its ground, and it is hard to believe that the man who made The Tenant and Rosemary's Baby can deliver such a clunky and, at times, laughable thriller. Sure, Bitter Moon skilfully navigated the thin line between the ridiculous and the sublime, but no such thing here, and the film quickly becomes a third grade thriller, like we have seen so many times before, never fully exploring the themes it evokes at first, and not even crazy enough to be entertaining.

Eva Green and her particular blend of stylised acting is at her best when playing unhinged character, and she gives a totally committed performance. Emmanuelle Seigner has the less flashy role of the pair, but one that she infuses with pleasant ambiguity. It is a shame that the script (co-written by Olivier Assayas, as hard as it is to believe) and the direction are no match for the pair.