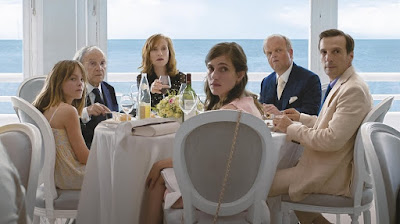 Michael Haneke is part of an exclusive club of directors who have won two Palme d'or in Cannes (alongside Francis Ford Coppola, Bille August, the Dardennes and Emir Kusturica), and many predicted even before seeing it that his latest, Happy End, would go on to win a third one (a feat that nobody has managed so far).

A tough, topical subject (refugees and bourgeois hypocrisy, Haneke-esque to the max!), with many of his regulars in the cast (Isabelle Huppert, Jean-Louis Trintignant...), the writing was on the wall. And yet, Michael Haneke, while still faithful to his roots, takes us down a path few would have expected. Those who feared he might have become comfortable with his advanced age and awards, can rest easy, and while the synopsis could hint at the man becoming a caricature of himself, northing could be further from the truth.


In Happy End, the Laurent family lives in a bubble of self-absorbed privilege, and casual racism, obvious to the world's woes despite those being so close to them, be it the refugees camp nearby, or their own Moroccan servants. Yet all is not well with them, far from it, from the son Pierre (Franz Rogowski) going on a massive breakdown after an act of negligence threatens the family business (his way to cope is by way of karaoke brings us one of the funniest scene of the year), to the creepy teenage daughter Eve whose mother was mysteriously poisoned, all the way to the head of the family, Georges (Jean-Louis Trintignant), who is facing the onset of dementia.

Yes Happy End might sound familiar in its themes and treatment, yet it is totally unexpected in others. One of most interesting aspect of the film is its oblique narrative structure, with just the right balance so that the audience is not completely lost, while omitting so many details, asking us to connect the dots instead. In that respect it echoes Caché, while perhaps not being quite as radical. As such, it never feels like one of those awful, po-faced issues films which too often pollute film festivals, with not an ounce of cinema in them. Yes the bourgeois characters are all mostly awful (and above all the youngest of them all, the teenage daughter Eve, a fearless and star turn by newcomer Fantine Harduin), but there is enough glacial dark humour to make them palatable. 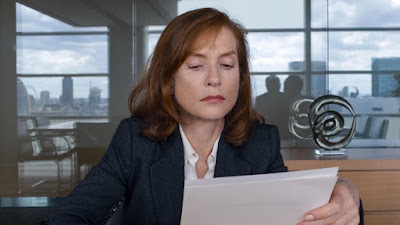 Happy End also echoes several of Michael Haneke's previous films, sometimes almost directly, be it visually (hidden video footage taken by an unknown presence abound), sometimes with some recurring scenes, or when he teases us using actors to play characters who seems have come back from a previous story, even though they do not have the same names (a monologue by Jean-Louis Trintignant in which he evokes an iconic Haneke scene had the audience chuckle in disbelief). It as if we were watching the Avengers Assemble of Haneke's film verse, a proposition that the Austrian director handles with an unexpected sense of humour, willing that he is to have fun with himself and how he is perceived. He is having fun indeed, with his story, his characters, and most of all, his audience. He also plays with our expectations of how the narrative should play out, particularly with a brilliant and unexpected ending that nobody could ever claim to have seen coming, giving Trintignant and Huppert the two best scenes.

It is remarkable that a director of this age and status is willing to laugh at himself and experiment. Everybody seemed a bit baffled at the end of the screening, yet Happy End is a film that will grow on you.