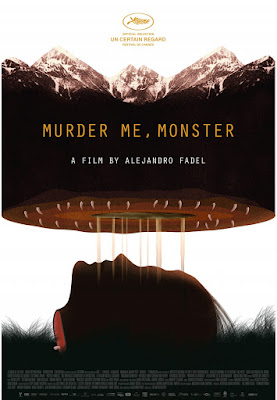 This year's Cannes edition truly is genre-tastic across its selections, what with Climax, Knife + Heart, Ultra Pulpe and this mystifying Argentinian gem: Murder Me, Monster. Set in the Mendoza region, usually more famed for its wines than supernatural shenanigans, the film follows the investigation into some brutal murders, with the victims decapitated in what appears to be the work of a monster for some in the village.


The opening scene with its unseen assaillant and its revolting decapitation, filmed in great details,  suggests a straight-forward horror: a woman whose throat has been hacked with such force that her head is barely hanging tries to adjust it back into place. Yet the film is nothing of the sort and gets more mind-boggling as it goes along while the audience does its best to try to follow. The pace is also much slower than that first scene hinted at, a glacial pace that might tries horror hounds' patience, as it turns into a sort of procedural whodunnit.

There is a suspect, a man who claims to have a telepathic link with the creature committing the murder and who is plagued with visions, while the villagers and the audience are left to wonder if he is telling the truth or is just hiding his own murder under a fantasy.

There is a lot to chew on even if we are never quite sure if we are on the right track. The film seems to hint at the psychological that the isolation has on its occupants. There also seems to be a commentary on machismo and domestic violence, with most victims being women. There is also a touch of Possession and even of the recent The Untamed in the way psychological symptoms express themselves in the physical form of a monster. Masculinity and its peer pressure are also put on the spotlight as the evil seems to transfer from one person to another.

If we wanted to dig a bit deeper, we could certainly find evidence of repressed homosexual desires and a lust for male to male domination, a theme that literally hits us in the face once the monster is revealed in its full "glory". Amusingly, a glance at the cast reveals that the monster is played by Stephane Rideau, who was something of a gay arthouse icon in France in the 90's (also the film was produced by Julie Gayet, how unexpected!)l But who knows for sure, as it has to be said the film is rather frustrating, not so much because it leaves it open to interpretation but more because it is not really apparent the director always knows what he is actually trying to say.

Murder Me, Monster will leave most audience utterly baffled but fans of arthouse genre bizarro cinema will still find plenty to enjoy and its stunning landscapes and interesting cinematography with its particular use of colours are a treat.