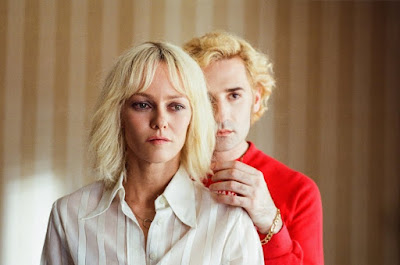 While the festival has not really featured many genre films over the last few years, apart from their midnight screenings, everything changed this year, with a cornucopia of cult/experimental films in all the strands. The icing on the cake however was the addition of Yann Gonzales's Knife + Heart in the official selection, and in competition when we expected it at Directors' fortnight. The French director made a name for himself with You & The Night, a visual and literary gem. So when we heard the premise for his new film, we all salivated!

Knife + Heart delivers what we expect, and yet it is a stranger proposition altogether, one that defies categorisation. At first, everything you would have hoped for in this project is on screen. There is a touch of giallo with blue and red neon lights galore and a masked killer. The murders feel like Brian de Palma and Kenneth Anger had teamed up to remake Cruising, with a snazzy direction, and a gay fetishist retro imagery so beautiful evoked. The first kill in particular mirrors the opening scene of the illustrious William Friedkin film, but with the addition of a very particular weapon. The electro/disco soundtrack is out of this world, which should come as no surprise consider Yann Gonzales's brother is in the band M83, and responsible for some of the it.

This could have been a masc4masc fantasy, and still make for a great film, but the director insists in spanning over the entire LGBTQ spectrum, with Nicolas Maury a stand out, because of the way his flamboyance never comes across as forced (he also has the best lines). Some of the supporting cast seems to come straight from an early 80's Pedro Almodovar film, there is even space for an older gay man, a fluffer called Mouth of Gold (!). Yet none of it feels like a box ticking exercise to appease a certain part of the tiresome woke queer brigade, no matter how small their parts, all the characters earn their narrative presence.

Half way through however, as if he was worried he was just about to make a style exercise, Yann Gonzales changes tone and pace, and we are in a more surreal cinema, where the spirit of Walerian Borowicz, but also Jean Rollin are very much in evidence. There is a whole section set in a mysterious forest, with some nice gothic visual touches (including an undead bird and a cemetery) as well as the backstory of a doomed romance. There also are the notable apparitions of Elina Löwensohn (the new muse of arthouse genre French cinema) and Romane Bohringer in cameos, both a joy to see on screen. It is as if the director just wanted to include all that he loves in his film, being different genres, or actors he grew up watching. We soon realise that Yann Gonzales does not just want to reference his vast genre culture, but share his passion for it, and those are not just vacuous nods.