Cannes 2018 - Everybody Knows by Asghar Farhadi 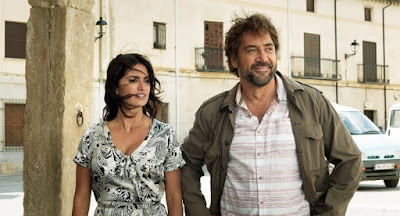 In Everbody Knows, Laura (Penélope Cruz) returns to a Spanish village for a big family wedding, having made her life in Argentina. The celebration takes a turn for the worst however, as her teenage daughter Irene (Carla Campra) is kidnapped the night of the wedding. Unable to contact the police due to threats from the kidnappers, the family members tear each other apart as they attempt to solve the mystery and rescue her.

When a director travels to a completely different country to its own, and films in a different language, there is an inherent danger that their style will not translate well, that they might have a superficial outlook over a culture they are unfamiliar with. Of course, it can also works beautifully (see Paul Verhoeven recently, with Elle).

While this is not the first time Asghar Farhadi has made a film abroad, (The Past was set in France, although the film still had some strong narrative ties with Iran) here he completely throws himself in the Spanish culture. Indeed the film opens with some idyllic, sun drenched scenes in the countryside leading to a riotous wedding.

However, as the tragedy strikes that same night, what follows is the painful entanglement of a web of lies, secrets and resentment that spreads across the entire family and those near them, with colours progressively deserting the film's palette. The whodunnit is compelling and satisfying, although, while unleashing a fair few twists and turns, the director chooses to remain resolutely realistic. With each layer of deceit uncovered, past dramas and unfinished business are unveiled, and Asghar Farhadi has a lot of fun making its audience suspect absolutely everybody, in ways that still feels totally believable.

Even more interesting is the social commentary throughout. While so many directors "do" social by hammering down their point with the lightness of a badly photocopied union tract, here Asghar Farhadi subtly brushes the class conflict at the core of the relationships between the family and those who gravitate around them (and not just in the obvious ways you first expect), or even within themselves, where bourgeoisie's snobbery still pulsates under the veneer of their close ties. 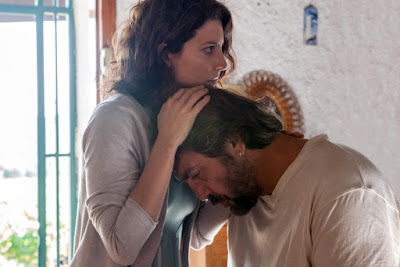 There is some clumsiness at times. The portrayal of Spain veers dangerously close to stereotypes at first (although this fits well with the facade that each character shows versus their reality), and an abrupt nod to Vertigo feels heavy-handed. You also could argue that while the director is in foreign soil, the themes he tackles are not a stretch from his usual work. Having said that, there almost is a touch of Haneke in the way he tackles bourgeois hypocrisy, as well as his interesting use of an omnipresent drone in the first act, whose footage is then scrutinised later on, a technique that would be right at home in a film of the illustrious Austrian director.

The acting ensemble is superb across the board. Of course, Penélope Cruz and Javier Bardem shine, and this is the former's most interesting recent part, baring herself more and more throughout the film, after her glamorous entrance. The supporting roles are just as worthy of praise however, with Bárbara Lennie in particular, as Paco's wife, being given the best, most intense scene.

The star wattage of Asghar Farhadi's latest film should open his work to a wider audience. For those more familiar with his previous films, asides from a few niggles, and while this definitely is not his best film, there is still much to enjoy and ponder.