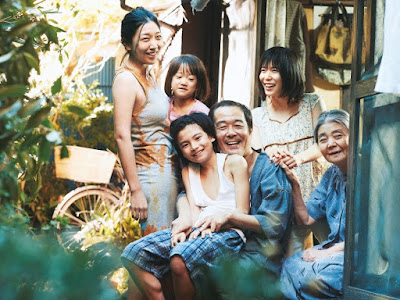 In Shoplifters,  Osamu presides over a family of shoplifters, in which every member, including the son and grand-mother have some illegal scheme going to to keep them at flow. Until the day in which the unexpected arrival of a little girl they decide to rescue from their abusive parents disturbs the fragile balance of their lifestyle.


We might have unfairly taken prolific Japanese director Kore-eda Horikazu (or simply Kore-eda as he is mostly known) for granted over the last few years. He has arguably made some of the best films of the last few decades with After Life, Still Walking and Air Doll, as well as having achieved worldwide recognition with Like Father, Like Son, which won the Jury Prize in Cannes 2013, from the hands of jury President Steven Spielberg who had expressed an interest in remaking it, yet his more recent output made fewer waves, and as a Cannes regular, he even found himself relegated to the sidebar selection Un Certain Regard After The Storm.


On paper, Shoplifters sounds Kore-eda esque to the max and not much of a stretch compared to his usual bittersweet and humanist cinema. Except that it is. There is a gentleness very much present as ever, the Japanese director not being one to deal with emotionally explosive scenes but there are some darker undertones to the story. While you expect the film to deal with family ties (and it does to an extent), this is not what the film is about, especially since, without giving too much away, the family quite what you expect.

The director is more interested in human interactions that are brought of necessity rather than choice and more than anything, the film is about survival and moral dilemma. It is all too easy at first to judge these characters of petty thieves until Kore-Eda places a mirror on his audience as we find out more about the characters and ask us to wonder what we would have done in their circumstances, when you were dealt a bad hand in life but not only (none of the characters here are presented as victims).

Each family member is damaged and has a reason to do what they do but it is down to audience to decide whether it is an excuse or not and there is a refreshing lack of moral judgement from the director. However the family's unusual lifestyle is threatened by this new arrival, not because of her actions since, she is more an innocent and naive bystander, but because of the way that innocence makes them consider their life choices.

The film delivers a sharp criticism of the contemporary Japanese society, which is presented as hypocritical and unable to deal with those left on the side of the road. Yet it never feels like a lecture (unlike recent Ken Loach's films) and is all the more affecting as a result.

Kore-eda is a real master of subtlety and in Shoplifters he delivers two of the most quietly heart-breaking of his careers, both featuring Sakura Ando. We are more used to seeing the Japanese actress in more outlandish roles but here with barely a move, a smile, a glance she expresses so much and is the heart of the film.

Shoplifters is the best film Kore-eda has directed in many years, one that is never sentimental yet emotionally devastating in its own understated ways. It would not be surprising to see it collect an award at the end of the week.