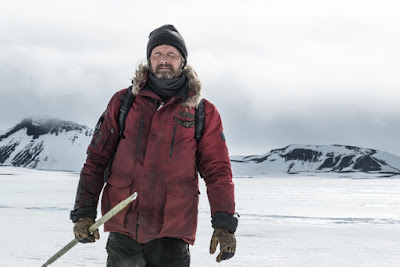 Survival films are terribly compelling, whether it's the beautiful, wild landscapes they are set in, the man against nature primal theme, or just the soothing schadenfreude of watching somebody exposed to the elements having a terrible time, while in the comfort of a cinema/your own home.

Some directors down the action route, others use the premise as a metaphor about the might and indifference of nature (Werner Herzog!)... In Arctic, Joe Penna chooses the path of realism. The film smartly opens right after the crash of a light aircraft that caused Overgård (Mads Mikkelesen) to find himself alone in the arctic wild, with no other survivors. We are spared the usual introductory scenes, we do not know the first thing about him, giving his plight for survival a raw simplicity.


Overgård survives the best he can, hoping a helicopter might notice his giant SOS sign dug daily in the fresh snow, sheltering in the wreck of his plane, feeding on frozen raw fish he catches with a makeshift fishing hook, while a threatening wildlife is never far. Just as salvation seemingly seems to arrive in the form of a passive helicopter, it crashes due to a heavy snowstorm, leaving the pilot dead, and a woman on board (Maria Thelma Smáradóttir) barely conscious.

Relying on a questionable old map, Overgård decides to attempt to walk his way back to safety, carrying the still unconscious woman with him on a sled. The introduction of this female character and the moral obligation elicited from this situation are the best elements of the film. She proves to be an incentive for him to push himself to save them both, as well as a hindrance, drifting in and out of consciousness, and at times, proving to pose a risk for his own life.

While taking the route of realism is laudable, with the script not adding some laboured and artificial dangers just to squeeze in a few lame action scenes, there just is not an awful lot to Arctic. The locations are breathtaking (it was filmed in Iceland), with some snowy plains, faraway mountains, and otherworldly feel (in the first version of the script, the film was due to be set on Mars!), director Joe Penna does not always have the visual flair to take those visuals to a higher level, sticking mainly to wide shots, followed by close ups of Mads Mikkelsen.

This lack of visual flair is all the more a surprise as the director is a YouTube sensation, with over 3 millions followers, who have made his name with some celebrated sci-fi shorts, and has had his fingers in many pies in the world of films, having worked as a cinematographer, special effects artist etc... Worse, for all those bold scenes filmed in seemingly treacherous condition, a scene in which a bear tries to claw his way into a cave where the Man has sought refuge is (badly) is filmed over an obvious matte painting, and stands out like a sore thumb, a terrible directing choice.

Early scenes of Overgård's survival attempts are gripping enough, but as he begins his perilous journey, the film just feels like a low rent The Revenant. Mads Mikkelsen carries the film on his shoulders, with few dialogues and just some close ups to convey both his sheer exhaustion and determination, but even his vast acting skills are not enough to save the ending, with its melodramatic notes the director had mercifully avoided thus far.

If you like arctic landscapes and Mads, you'll be in heaven. For anybody else, there is sadly few reasons to recommend this debut.