My Top 3 Cats In Films 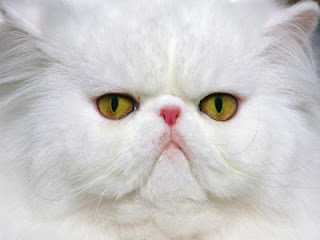 If you follow me on Twitter, you might have noticed a worrying increase in non-films, cat-related tweets. I love cats, every since we rescued a cat that had been thrown out of a car outside our appartment building when I was 15. He died 6 months later and I'm still crying to this day. So cats in films, a rich subject. Except that I will not bother with anthropomorphism, or mention Puss in Boots, as hilarious as he is. Instead, I present to you films which faithfully portray cats as us cat lovers know them too well.


1) Niya the cat in Arrietty 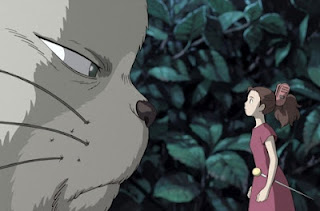 Arrietty, the latest film released in the UK from the Ghibli studios, was a pure enchantment for me. More gentle than their previous animations, I described it in my review as pleasant like dozing off in a field on a sunny summer afternoon. In it, a family of very small people live under the floorboard of a country house, "borrowing" the things they need to survive during night time escapades. The fat, inquisitive cat of the house's occupants does not take too kindly to them, chasing them at first, then losing interest as cats often do. But, without spoiling much, in the end, it is Niya the cat who reunites the young sick child with the family of small people just as they are setting off to pastures new. The scene where the sick young boy tells the little girl from the small family that "she gave him the will to live" broke my heart and you have got Niya the cat to thank!

Niya is a fat, grumpy, territorial kind of cat but full of love once you get to know him, and you just want to tickle his tummy and kiss him all over! Niya truly deserves to be my top cat in films.

If you have not seen 8MM then please don't. A foray into the murky word of snuff films, it actually starts off promisingly with a keen eye for moody, urban isolation and an unusual Arabic soundtrack, before  turning into the worst kind of vigilante films. In it, Nicolas Cage plays a private detective hired to investigate what appears to be a snuff film, found by the widow of a recently deceased millionaire. But the cat, where is the cat??

As Nicolas Cage's investigation takes him closer to the truth, he encounters Dino Velvet, the maker of extreme adult movies. And to convey they they're not here for some, naughty, saucy laughs, each of their films starts with a rather nasty video insert. In it, a cavernous voice attempts to sound both sexy and menacing, purring "Welcoooome to the world of Dino Velvet", while various "sexy" and rather rough images materialise, including, and bizarrely, the short clip of a visibly pissed off cat meowing. I love cats but I am not sure the image of a pissed off cat meowing conjures the kind of dangerous seduction the director had in mind.


3) Blofeld's cat in For Your Eyes Only 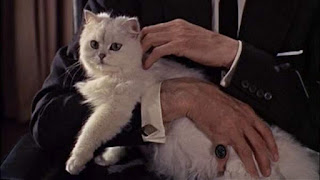 So Blofeld's cat has been spending several Bond films doing nothing except sit on the lap of his evil genius owner. While not being filmed, I bet he was fed salmon soufflés and had a minion in tow whose sole job was to present him with a silver plated cat litter when required. But things came to an end when Bond decided to get rid of Blofeld once for all. Having had his helicopter remotely hi-jacked, the British agent manages to rip out the controlling device and grab the bald villain on his wheelchair and after a flying visit of the factories of East London, drop him to his death in an industrial chimney. The horror, what about his cat? The cat, showing absolutely zero loyalty to his owner (unlike a dog who would have plunged along to its death), just jumps out of the wheelchair and run off before Blofeld takes off. The sad reality of a cat's loyalty!

Although you might understand his desire to abandon his master at the first opportunity after watching this video from You Only Live Twice and what he was made to endure! Cats do not like big crowds and loud bangs, so an exploding villain's lair is the perfect place for them, the absolute perfect place! This cat looks either completely demented or maybe it is just an animatronic creation. Either way, he is freaking out in a way only cats can!