I Against I Review 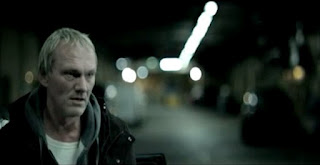 As a proud Londoner who will never grow tired of this amazing city, I am puzzled as to why no modern directors have been able or even willing to convey all of the beauty and mystique of the big smoke recently, especially at night. The louche London discovered at the back of taxis during night time escapades, the randomness of its architecture, the cold and unusual charm of empty Docklands streets and their towering glass buildings, the soulless corridors of the Jubilee Line and DLR, the thousand bars it would take you a lifetime to all discover, the wealth of potential stories thanks to the most varied and exciting population on Earth... Only last night I discovered the King's Cross Social Club, a unlikely mixture of grubby indie rock dive and upmarket pub, lovingly nimbed in red neon light. I thoroughly recommend it, so much so that I feel the need to include a picture, so there you are, just below. 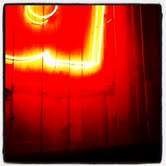 And why is the Gherkin nowhere to be seen in our screens, apart from the Apprentice credits and Basic Instinct 2? Where is our Michael Mann?

So it is all to the credit of I against I (what a clunky title!) to have attempted to do our beloved city justice, despite some obviously limited means, with the action entirely taking place of the course of one night around East London (bar for some flashbacks). The film is also notable for having no less than three different directors, one of them being James Marquand, the son of Richard Marquand (Return of the Jedi). Who said nepotism was not alive and well in the world of cinema? In the press release, the trio quotes the moody 80's and 90's films of Michael Mann and Ridley Scott as major influence, which can only be applauded.

But do they pull it off? As a film audience, we are still all scarred by the wave of vile ersatz which followed Lock, Stock and 2 Smoking Barrels and a shiver did run down my spine when I read that this film was indeed featuring the murky criminal underworld of London. (I propose a carta that any new British director MUST sign, in which they agree not to feature gangsters and mockneys).

I against I dangerously dangles over this pit of mediocrity of such films, mercifully never quite fully falling inside it. It does feature more loud pin striped suit wearing tossers than an Essex bound Friday night train from Liverpool Street but at large, its characters are not not as hate inducing as you would fear, just fairly unlikeable. And sadly the acting is fairly ropey, with the exception of Ingvar Eggert Siggursson, the only stand out amongst the whole cast. 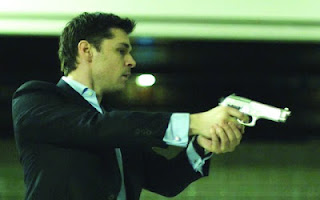 The film actually starts off promisingly, with an intriguing premise. When the head of a criminal family is found murdered, his son has the two potential suspects (caught on CCTV) pitted against each other, and order them to kill one another (Is that a tribute to Spy vs Spy?). But despite a short running time, I against I still loses its steam fairly quickly, because of an uninspiring and muddled script. Sure there are twists, but barely exciting ones and given the type of film it belongs to, the mere fact that there are twists is hardly a surprise in itself.

The directors have also spoken of the influence of Asian and French gansgters films, and while those intentions are laudable and their tastes impeccable, unfortunately they have a long way to go to reach those heights. I Against I is not the Colateral or Heat of London it truly deserves. One can only hope that it will happen one day. As for the directors, they have a certain visual flair, so I am curious as to what they can achieve next, given a proper script and bigger means.

I enclose the trailer, but also the video for  Love Dagger by Rimer London, a video which has absolutely nothing to do with the film yet, just like I Against I, and despite its lower than zero budget, somehow conveys the poetic and alternative charm of London at night I m so fond of.

I Against I is out in selected cinemas in London today.