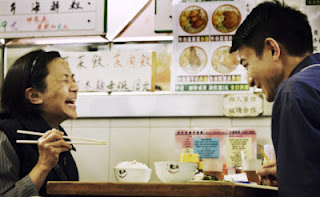 Set in modern day Hong Kong, A Simple Life is the story of Ah Tao (Deannie Yip) a maid who has lived and worked for the same Chinese family for 60 years. With the family now largely living in America, Ah Tao takes care of the remaining family member, Roger (House of Flying Daggers’ Andy Lau). Roger, unmarried and now middle aged works as a successful film producer in the Chinese movie industry. Not wanting for money, Roger lives a frugal life and is frequently mistaken for a blue collar worker due to his low key clothing. Ah Tao serves him gourmet meals and keeps their home spotless. Food is a central theme within the film that allows for the expression of love and compassion along with its associated memories. Used to the status quo of their relationship - a life long one for Roger - how Ah Tao and Roger relate to each other changes when the elderly Ah Tao has a stroke. Not wanting to be a burden to Roger, Ah Tao insists on moving into an old folks’ home with Roger being her only person or ‘family’ left to visit her.

A Simple Life is a study of aging, social value, gratitude and service. The old folks’ home that Ah Tao chooses is based on what she can afford and the conditions are cramped with the minimal degree of comfort. She insists on not accepting help from Roger’s family as she does not want to be a burden to them. Though at first their relationship appeared dismissive by Roger, he over rides Ah Tao’s self-deprecating nature and takes care of her as if he is the God son that she claims to her fellow patients so as to hide the fact that she has ‘only’ been in service all of her life.

Freed of their former employer/employee relationship the two express familial-like love and enjoyment within each other’s company. This at no point is done in a sentimentalised way. Instead the two leads, share memories and smiles that could only come from a lifetime spent together. Ah Tao has clearly always led adignified life and though her new home is a vast reduction in her quality of living, she finds a way to make it work with innate grace and kindness. Loved and helped by Roger, Ah Tao is given a new lease on life when so many of the other people at the old folks’ home having been forgotten and pointedly abandoned. 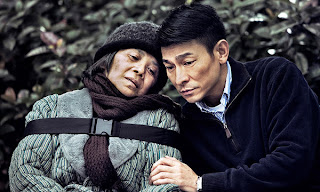 Deannie Yip, a veteran of Chinese cinema, is younger than her character but masterfully denotes the decline in Ah Tao’s health and the aging process which will affect us all. We see the gratitude that Roger’s family expresses towards someone who could have been easily dismissed or left to live out her remaining years without the family that she has played such a central role in caring for and raising. The audience knows the direction of the story is going in so when time inevitably catches up on Ah Tao the sense of loss that is felt is palpable.

This is subtle filming making at its best. Director Hui keeps the film free of elaborate cinematography. Instead the deceptively ‘simple’ story of our connections in life and what it is to age in a large unforgiving city are developed by the superb, near minimalist script. This is a film full of riches and for anyone who has lost a parent or elderly loved one they can not but be deeply moved by this film.