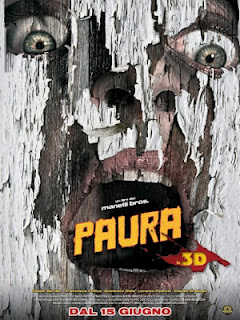 On to day two at FrightFest, a full on day with five films back to back. It was an odd day, with a very uneven line-up, an audience who was suffering from mid-festival fatigue, and a screening which has already made FrightFest history, perhaps not quite for the right reasons.


Isn't it nice when a film truly matches your expectations? I went into the first film of the day, Outpost 2: Black Sun expecting nothing and I got nothing out of it, being glacially boring. Kudos to its hyperactive producer however, who was busy distributing leaflets outside the Empire Leicester Square advertising an i-phone game based on the film, and brought on stage two actors (not from the film) dressed up as nazi zombies. 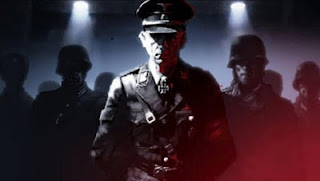 Outpost 2: Black Sun is the sequel to barely seen Outpost (2008) about the creation of a nazi zombie army. In this sequel, we follow Lena (Catherine Steadman) who is pursuing a nazi war criminal, and teams up with Wallace (Richard Coyle), an adventurer, and a Special Forces Unit as they uncover a battalion of nazi living dead, whose numbers are growing.

There is a lot to be said for good intentions. The directors do not go the easy route of the horror/comedy, keeping it all as straight-faced as possible. And they make the most of their micro-budget with a rather atmospheric effort. Plus I liked the nods to Raiders of the Lost Ark, especially with a rather effective scene near the end. But all the same, while their efforts and dedication have to be applauded, the film is frightfully boring, lacking any kind of pace and tension. I have read that having seen the first film does help a lot, which is a big demand to make from an audience given how few people have seen it!

Nazis have always been a fertile ground for the imagination of horror/fantasy makers, and I broke my FrightFest virginity a few years ago with the hilarious Norwegian Dead Snow, about an army of, well, zombie nazis! So it must have taken some kind of effort to make them so dull, them and bizarrely, the witch has tagged along and appears to belong to another film entirely! 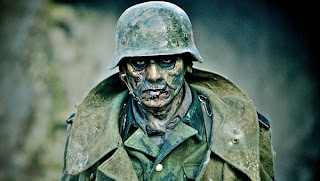 And as the final nail on the coffin, the director makes the fatal mistake that have plagued so many horror films in the past (usually sequels): they bring in the army/GIs/Marines whatever, a sure way of having your audience not care for any of the characters. Remember that woeful The Hills Have Eyes sequel to the remake lately? Yes, exactly! But what about Aliens I hear you scream? As great as this film was, did you really care for any of the GIs, apart from Vasquez and Hudson?

Most grating of all was the attempt of an American accent by both leads. And to think the ending opens up to a threequel...

The day did not get any better with the second film of the day, Paura 3D, by the Manetti Brothers. Now correct me if I'm wrong, but if you are going to call a film Paura (fear in Italian), you would expect it to make it scary? Yet it turned out to be a real oddity but not for some interesting reasons, one of those films that makes you wonder what exactly were the directors trying to achieve. And definitely not scary, which is a shame considering the title! 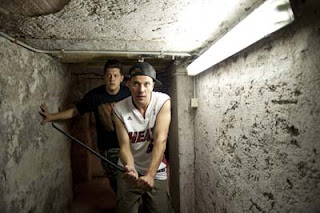 In Paura 3D, three wayward youngsters crash a rich old man's house while he is away for a week end of partying. Little did they know that the owner is on his way back earlier than expected, and that something frightening is lurking in the basement...

There is a social commentary of some sort, pitting the less fortunate young men against a word of wealth that is totally alien to them, but it does not exactly take us very far. And I am all for a slow build up but here the first hour is just plain boring, with some leads we care little for. The pace speeds up a little bit for the third act, as they discover the secret and horror of the house, but even still, there is very little to recommend this film for, bar a couple of squirm-inducing gory scene, and a satisfying performance from one of the key characters (even if the role itself is rather confusingly written).

There are echoes of much better films in here, The Woman, Hostel, The People under the Stairs, and perhaps Funny Games (in reverse) but nothing that makes this stand out. I also have to mention the truly bizarre hard-rock soundtrack, which might be a testament to 80's Italian horror classics such as Demons, or just a testament to the directors' horrendous taste in music. 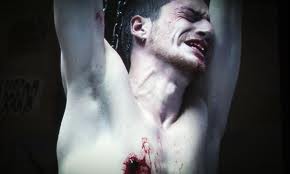 A quick note on the 3D, I am not sure if this is because I am not used to seeing proper 3D films as opposed to post-conversions, but it was rather efficient, too efficient even, giving me a frightful headache at first, and seeming weirdly exaggerated, with an image that seemed oddly distorted. It is even more apparent with the subtitles which spring out of the screen.

The Manetti Brothers made themselves known to an international audience last year with The Arrival of Wang, the bizarre story of a Mandarin speaking alien, and which I have to admit I had not seen, but based on my first encounter with their cinema, I am not in a hurry to watch. At least the directors were pretty cheerful on stage and I loved their anecdote: one of them (I do not know who was who!) went on a school trip to London in the 80's and saw Star Trek 4 on the big screen of the Empire Leicester Square. He promised his school mates that one day, one of his films would be shown on this big screen. And true to his work, it has happened, shame it had to be for such a lacklustre effort.


So not the finest beginning of the day, but it got considerably better with three way more interesting films, including one that no FrightFest attendee will ever forget. Let's just say Joanna in Prague, city of the accchhhhcult... Join me in my next post for FrightFest 2012 Day 2.2.
at 23:45