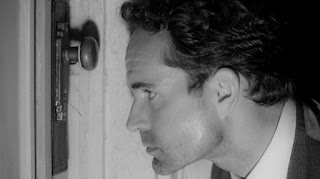 Guy Maddin is one of the most interesting directors working at the moment. He has built his own inimitable style, which I could describe as playfully experimental, with nods and tributes to silent and black and white films well before it became fashionable, as well as a sizeable influence from his home town, Winnipeg in Canada.

But Guy Maddin is a bit naughty. The BFI in London had organised a preview of Keyhole as a fundraising event, with all the profits going towards the director's next project, a remake of sorts of Alfred Hitchcock's lost film, The Mountain Eagle. Except that the director did not turn up! Instead, he sent us a video message that was hilarious but not quite enough to compensate the disappointment of his absence. Although it seems fitting that for a film about spirits like Keyhole, his director was with us, well, in spirit at least!


The Canadian director has been on my radar for quite a while. The first time I heard about him was when Careful came out in France in the middle of the 90's, although I did not have a chance to see it at the time and still not have. The story of a village perched in some mountain, with the populace under the constant threat of an avalanche and living in as quietness as a result, sounded intriguing enough! My first real encounter with his world however was The Saddest Music In The World, about a music festival organised to find, well, the saddest music in the word. It was shot in the grainy, blurry fashion of a very old black & white film and had Isabella Rosselini as a beer baron with glass legs filled with beer. Needless to say I loved it.

And then I saw My Winnipeg, an irreverent "mockumentary" about Maddin's beloved city, retracing a completely fabricated story of the city, with my favourite part being the striking image of some horses stuck in the frozen lake that had been left there as a sort of notable tourist attraction. This was fairly enjoyable and funny at parts but lacked of a certain emotional connection. 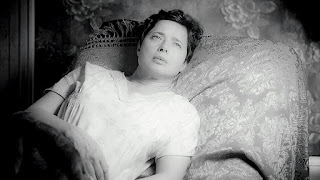 His latest, Keyhole, has been branded its most approachable yet (which to me, prompted the question: define approachable?). I shall let it out early, to me it is by far his best film. It displays the kind of technical and inventive brilliance we have been accustomed to. But there is an added depth to it that was missing from his previous work.

In it, a bunch of gangsters lead by Ulysses (Jason Patric, in an intense and brooding performance), on the run from the police goes into hiding in an old house that is populated by ghosts. The ghost (or is it?) of his mum (played by Maddin's regular, Isabella Rossellini) is hiding in a room upstairs, only letting her son contact her through the keyhole of the door, while the ghost of her dad is tied up to her bed by a chain, as a sort of dead weight she cannot separate herself from. And as the story unfolds, the barrier between the dead, the living and the ghosts is further blurred.

So Guy Maddin has not lost his sense of humour and quirks. I particularly loved the cycle-powered electric chair, and the, well, dusty wooden body appendage coming out of a wall while the ghost of an old man commits a lewd act on it. But as I was saying earlier, there is more to it than just bizarre images and randomness.

In his video message to the audience, the director explained that the film has to be seen at least three times to be understood and I would agree with it. While I am not usually obsessed with trying to find the meaning of every film I see and understand every single plot elements, here the story is so rich that I cannot wait to see it again to carefully unfold it all.

It might be told in a chronological fashion, but only if you are looking at the time on one of those Salvador Dali liquid watches. Past, present, futures, the dead, the living, memories, regrets... All of these elements are cohabiting as if the house itself was the physical representation of Ulysses's mind.

Fans of the directors will find plenty to enjoy, including his muse, Isabella Rossellini, here giving yet another great performance, touching and nuanced. And Guy Maddin here makes full use of his artistic flair, with Keyhole being wonderfully atmospheric and the most technically accomplished visual feast I have seen this year, but with added gravitas. There have always been elements of melancholy in his previous work but this is probably his darker film yet.

The film is not a gangsters movie although it skillfully uses elements of it. It is not a haunted house type of film either, although I have to admit I did find some scenes rather scary, in an old fashioned way that is so refreshing compared to the lazy modern conventions of the frantic editing and jump scares. It is very much its own thing, an indoors odyssey where here Ulysses might not cross much physical distance but certainly goes a long way mentally. And I certainly encourage you to peek through the keyhole and join him! Keyhole is out in the UK on the 14th of September.