Eccentricities Of A Blonde Haired Girl 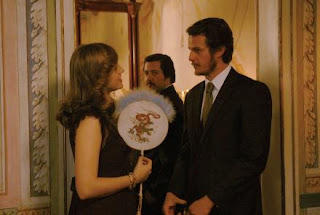 Veteran Portuguese director Manoel De Oliveira is 103. Yes, 103 years old. Which gets to prove that an interesting, creative life full of culture doing what you love will make you near immortal. And the man does not stop working, which is a bit crazy. One of this latest films, Eccentricities of a Blonde Haired Girl (2009), one which I wanted to see based on its title alone, is an enchantment, filled with invention and romanticism, most definitely the work of a young man!


I have to admit I had only ever seen one of his films before that, attracted by its reputation for surrealism and its great cast: it was called O Covento (1995), it starred Catherine Deneuve and John Malkovich, and to say I was completely baffled by it would be an understatement. It was one of those films which I basically did not understand from start to finish. I vaguely remember some intriguing images and catching up a few story threads there and then but that was it. By the way, I saw this in Paris in a cinema called La Pagode, which is basically, as its name indicates, built to look like a pagoda. It sounds naff but it is wonderful. I was thrilled to see that this venue still exists, if you find yourself in Paris you must visit it,  and the decoration inside is delightful too! (although beware, only the main screen is decorated in this fashion, the others are more traditional.) 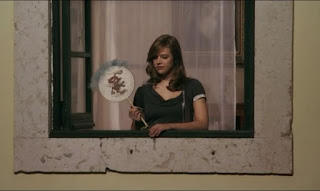 So back to the blonde haired girl and her eccentricities. The Portuguese master's cinema is one of pace, and despite the running time clocking out at barely more than an hour, the film starts with a long opening credits scene with a static camera set in a train, as an inspector checks every single passenger's ticket. Here we meet Macario (Ricardo Trêpa), a thirty-something man, who confides in the woman sat next to him (long time muse of the director, Leonor Silveira),  and through flashbacks we follow the highs and lows of a passion that consumed him. The object of his affection was a blonde girl called Luisa (Catarina Wallenstein) who lived across the street from his office, and whose love he pursued blindly, no matter what the personal cost was. But how could reality ever be a match for his dreamed vision of love?

The most interesting aspect of the film is how while characters behave like they were in a 19th century novel, with a story of rigid social codes and adventurous, months long business trips in far flung corners of the world bearing all the trappings of tumultuous romantic books of this era. And indeed the film is based on a book written at that time by Eca De Queiros. Yet the film is resolutely set in present day, with characters paying with Euros and using computers. This period clash might sound like an artifice but it works surprisingly well, making the story and its themes appear timeless. 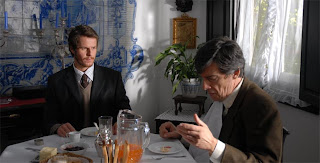 Another unusual aspect is the length of the film, especially considering that this type of story provided enough material for the director to come up with a sprawling saga of several hours. Yet with a brilliant sense of restraint, Manoel De Oliveria offers us a fully realised film that never feels frustrating yet manages to condense its rich story into its short running time. Whole episode in the life of Macario, (such as his business trip to Cape Verde where he makes his fortune) which could have been spread over an hour in any other films, here are sometimes merely summed up in one sentence.

The film is beautifully shot and impossibly chic, in an old Europe kind of way, yet never feels stuffy. Lisbon looks particularly gorgeous and all the actors without exception are so elegant, making this film a real treat.

A delightful film about infatuation and the illusion of love, I recommend you lose yourself in The Eccentricities of a Blonde Haired Girl. Or you could just watch O Convento. If you are brave.