Curse Competition - Win A DVD Of A Singaporean Horror!

As a big fan of horror films and Asian cinema, I am naturally very excited about the release of Curse, a Singaporean horror, which is a bit of a novelty. While the last decade has seen the release of many films of this genre from the Far East (Thailand, South Korea, Japan etc...) we seldom have the chance to witness any outing from Singapore. And now you have the chance to win 1 out of 3 DVD of Curse in this competition!


In Curse,  a squad of soliders is despatched on an island in the south of Singapore to investigate some mysterious disappearances, and unwittingly disturbs a burial ground, unleashing a supernatural curse. (And to think the scariest thing I encountered while in Singapore was the 'jumping spider"!)

I have not had a chance to see it quite yet, but it has picked my curiosity and must be worth watching for fans of Asian horrors. It is based on a well known local urban legend apparently, and, with its non-linear story-telling, has been described as a mix of Evil Dead, The Usual Suspects and Rashomon. I'm sold! 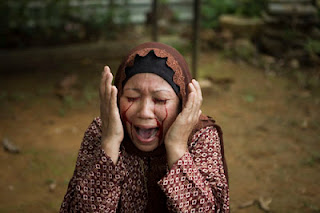 So for your chance to win one of three copies, just answer this easy question:

What film presented at Frightfest in London this year featured some zombie sushi?

A) Yo Sushi
B) Dead Sushi
C) Berberian Film Studio

To answer, tweet your response to me (@FilmLandEmpire) using the hashtag #FilmLandCompetition

The three winners will be picked randomly out of all the correct answers. Please note this competition is open to UK mainland residents only. Deadline to apply: 10th of September.

Curse will be released by Grayson Pictures on DVD on the 17th of September in the UK. Good luck!