Man With A Movie Camera: The Honest Review 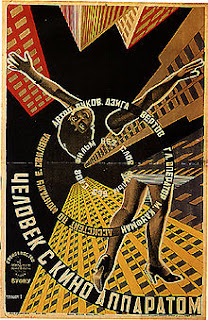 Last month, British film mag Sight & Sound published its top 100 lists of the best films ever made, as they do every decade, and as voted by over a hundred of the most respected film critics and experts. Within the top 10, there were some mostly obvious titles, except one which I had not even heard of: Man With A Movie Camera by Dzyga Vertov, made in the 20's, and billed as a Russian experimental film. Right down my street I figured, so out of curiosity, and since the BFI had the brilliant idea to screen all of the top 10 films this month, I decided to go and check it out, and report back.


First of all, I must point out what a lovely surprise it was to have a live piano accompaniment. I am not sure if the BFI has offered it for every screening of the film, but having never had the chance to experience that before, and especially thanks to the plush velvety loveliness of the BFI, it felt like a treat, miles away from the dire modern multiplex experience. I do wonder how the pianist managed to play the instrument in the dark, and to keep it in sync with the film but she deserved all the applause she got! 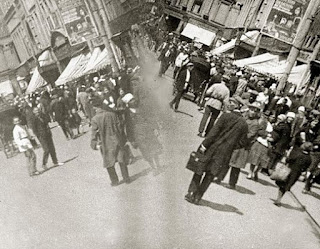 So the film itself. As a non-professional critic, I have to liberty to write exactly what goes through my mind about films. I have zero snobbery, and while I will always leave the benefit of the doubt to a film I might not understand, or the ability to fully appreciate as a fully-fledged historian, my goal has always been to share my passion of films with my readers, in a way that is curious, enthusiastic and honest. So you can guess that by calling this post "The Honest Review", I was intrigued but not completely won over by this.

It is experimental and rather bold for its time, in the sense that is is probably one of the first meta films, telling us through written inserts what its intensions are: document urban life. And as an epilogue, we are shown a cinema theatre as the crowd is beginning to pile in, about to watch the film we are seeing, and, bizarrely, seats are flapping up and down by themselves. On top of this, throughout the film the cameraman is regularly seen, becoming somehow one of the subjects of the film.

I have to admit when I heard "experimental", especially considering the intention note of trying to make a film which would not mimic the narrative style of a novel of a play, I was perhaps expecting a different kind of film. We are not talking here of a Tarkovsky spiritual experience, or a Lynchian head bender. It is experimental in the sense that it does not present us with a story. But in fact, it is more akin to a documentary. 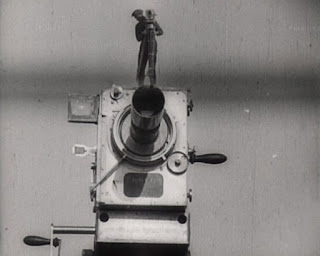 Separated in 6 different reels, I have to admit it took me some time to get into this, not that I really did, with my interest drifting on and off. First of all I struggled to see what was the point of having 6 clearly marked segments, when there were so little to differentiate them, with some characters and scenes repeating from one to another.

As a a depiction of urban life, the film relies heavily on footage of industrial scenes, with an emphasis on machinery and the workers which operate them. Intertwined with those parts are scenes of workers' and their familiy during their off time, at the beach or relaxing in other ways, the whole thing becoming more and more like the utopian propaganda of the modern Soviet society of the time, when men and machines are fully integrated, and the cameraman and his tool, often seen on screen, becomes a part of this by witnessing it, thus finding their parts in this idealised vision.

While that might make this sound a little dour, and while part of it are a little repetitive, or even tedious (thank god for the short 68 minutes running time), there is an undeniable and infectious enthusiasm at play, both for the subjects being filmed as well as the medium of cinema itself, with the director experimenting with various and intriguing visual trickeries in the most wonderful fashion. There is a particularly striking special effect of an eye being superimposed over a camera's lens, as if the cameraman had metaphorically morphed with his tool, with its sole function in society to record the world around him. This, at times, made the film looks like the Show and Tell of cinema's childhood (but without much of the Tell). 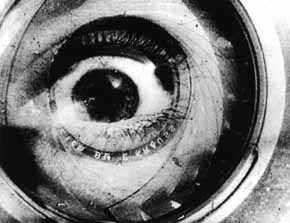 I have to add, there is a certain poignancy, as cinema is entering its second century, to see the lives of ordinary people captured all these years ago, knowing that they are now all dead and how much has happened in the world since then.

Would I recommend this? While the average film-goer might struggle to find the most remote interest (and indeed there were a few walk-outs during my screening), this is an oddity that anybody curious about the medium of cinema should experience. Whether it actually deserves a spot on the top 10 list of best films of all times, I shall leave this to proper film historians to decide. Somehow, I would quite like for a modern director to do, not a remake, but a reimagining of this, adapted to our modern society and all of its technological advance and current ideologies, something shot on a low budget and solely armed with an HD camera and a curiosity for the world, and see what they would come up with.