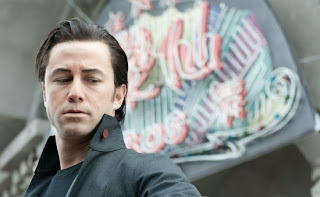 Writer/director Rhian Johnson burst onto the indie scene with 2005’s razor-sharp and deeply cool high school noir Brick but his second feature, the adorable conman caper The Brothers Bloom, had an unjustly muted release and has never been given the attention it deserved. Instead of staying in his mannered art-house comfort zone, Johnson has attempted something very different with his latest film that’s been gathering tremendous buzz: a science-fiction action movie starring Bruce Willis.


2044. Thirty years from this point, time travel has been invented but outlawed, and is only used by the most powerful criminal organisations. Untraceable murder is almost impossible in the future so targets are zapped back for Loopers like Joe (Joseph Gordon-Levitt) to kill and dispose of. Part of the Looper job description is that eventually an older version of yourself will be sent back to be killed (closing your loop). But when Joe’s future self (Bruce Willis) arrives, he quickly escapes, sending his employers after both of them. Joe just wants to kill him and put things right, but Older Joe’s got plans of his own.

I don’t know how excited I’d have been for Looper if it hadn’t come from Rhian Johnson, but at first glance there’s not much to link it to his previous films, Joseph Gordon-Levitt aside, and there are noticeably fewer of the filmmaker’s idiosyncrasies. Characters get fun job titles (hired guns are gat men) and there’s the occasional piece of noir-ish dialogue (“Big hats. Small potatoes.”), but the complexities of the plot take precedence. While the genre may be a departure for Johnson, the labyrinthine plotting of his previous films clearly stood him in good stead for a time travel film. There’s a lot of voice-over exposition early on and he’s clearly concerned with getting the details right. At the same time, there’s a welcome sense of humour to balance the info-dumps. 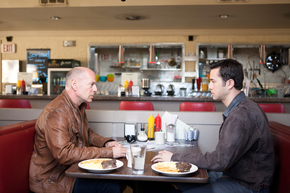 In terms of setting, the film’s Kansas City isn’t explored in any great detail it’s a violent place where people are gunned down in the street without reprisal and the police are in the pocket of Joe’s laconic but fearsome employer Abe (Jeff Daniels). There’s very little glamour outside the nightclubs, as Joe’s fellow Looper Seth (Paul Dano) has a hover-bike that he can’t start and the time machine itself is wonderfully unremarkable. Violence doesn’t stop at the city either, as evidenced once Emily Blunt’s farm-owner Sara is introduced. She’s got a shotgun by the front door to protect herself and her son from frequent intruders. It’s also the most explicitly nasty of Johnson’s films to date, with the consequences of a Looper failing to close his loop certain to stick in your head for a while.

Of course, it wouldn’t be a Bruce Willis science-fiction film without a bit of action and those sequences are stylish and well-shot. Once the two Joes go on the run they’re pursued by Abe’s gat- men, led by the incompetent Kid Blue (Brick’s Noah Segan), and we see the lengths the older Joe will go to ensure his mission is completed. But while it’s certainly an action film, Johnson is far more interested in using the time travel plot to examine how characters develop, showing how older Joe has reached the point he has in his life, and whether the younger Joe, with his determination to return to his old job and his old employer, will find himself agreeing with him. Abe takes great pride in the fact that he found Joe as a kid and put a gun in his hand, and Joe’s loyalty to Abe makes him a fascinating anti-hero, especially once he runs into Sara and her son.

The cast is excellent. While the make-up to make Gordon-Levitt resemble Willis doesn’t fully convince, the two performances are perfectly matched. The former works hard to make his intonation and mannerisms fit with the older actor but both give fully rounded performances too. Blunt doesn’t appear until the second half but gives another strong turn (it’s been a good year for her). Jeff Daniels is terrific as Abe, who was sent back from the future to run the Loopers and who only uses his hammer when talking is no longer an option.

There is a bit of a lull around the halfway mark as Johnson manoeuvers the elements for the final act but once older Joe’s mission is revealed Looper shows itself to be a humane, clever sci-fi. As with much great science-fiction, it’s the human element that’s vital and with a great script and solid performances, this is very good sci-fi indeed.

Looper is released on the 28th of September in the UK