FrightFest 2012 Day 2.2: Under The Bed, The Orrchcult and Maniac 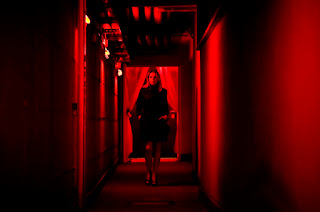 And on to the second part of a full day at FrightFest. As per my previous post, the day did not exactly start off well with Outpost 2 and Paura 3D. But it got better, and increasingly weirder. It is also the day when somebody brought a full Chinese takeaway inside the cinema. The horror. It did really feel that our civilisation had reached the point of no return after that.


So half way through the day, we were presented with Under The Bed, a film I knew absolutely nothing about and which turned out to be the highlight of the festival at that stage. In it, a teenager is reunited with his family having spent two years away from them. We soon understand that the reason for his exile was that he set fire to the family house, killing his mother in the process, trying to get rid of the nasty creature that inhabited under his bed. Unfortunately, the creature is still there, following him and his younger brother, determined to get them both. 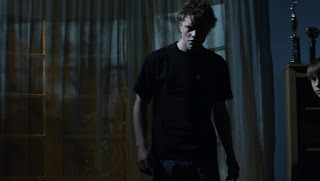 Under The Bed is something of an oddity, a throwback to a certain kind of 80's horrors that involved children but was never meant to be watched by them (but they would find a way to anyway, just the way I did), with a surprising level of violence. And while a film like Super 8 was like an empty shell that mimicked the films of the era but was desperately empty and uninvolving, Under The Bed does not need to set the action in the 80's to form a convincing tribute to them.

Tapping into the most basic childhood fear (don't tell me you never thought there was something under your bed), the film is anything but sentimental and an idyllic vision of family life is not to be found here. Director Steven C. Miller shows some great skills in setting a very gripping and atmospheric vision, which makes it feel like a modern fairy tale, dark in the way they should be. There is even an echo of A Nightmare on Elm Street, with a bold tribute to its trademark dream scenes. And I particularly liked the vision of the creature's own world, in a dark dayglo kind of way.

There are a few surprises along the way with some of the victims of the monster, as well as the character of the stepmum who is here the antihesis of your usual stepmum, caring and understanding, as opposed to the children's biological dad who is a real douche throughout. 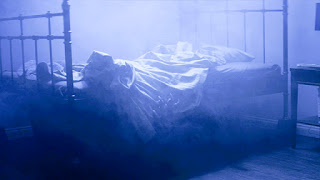 So the film is not within its flaws. A baffling scene featuring the creature early on seems to lead to a pay-off which ultimately does not happen, and does not make any sense as a result. And the design of the creature is misguided, as a run of the mill monster which does not fit the dark fairy tale's tone of the film.

Nevertheless, gripping, bold and involving, one not to miss. Now I hope the creature under your bed does not catch you first. Sweet dreams!

A word on the magic of film festivals and Twitter. The director was not present, yet he responded to a few tweets I sent out after the screening, which put a big smile on my face, you just never know who is going to read what you write!

And then came Tulpa... 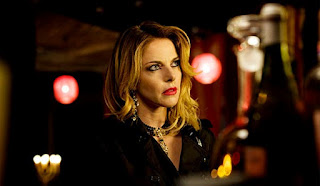 Tulpa had been sold to us, Frightfest audience, with much enthusiasm. It had a prime spot on the Saturday night, and was presented to us as The revivial of Giallo. Alan, one of the festival's organisers, came on stage proclaiming with much glee: "Giallo IS back" to much applaude. And about ten members of the cast on crew came on stage, all Italian, incredibly smart and smelling wonderful against a sea of smelly and casually dressed horror fans (not myself, obviously, my Italian roots still live on!).

In it, Lisa (Claudia Gerini), a high flying executive, is by night a regular visitor of an ultra exclusive sex club. When members she had casual encounters with are found brutally murdered, she decides to investigate.

And the film started off beautifully, so atmospheric, incredibly well designed and shot that I was enthralled by it, mentally declaring it one of the best I had seen this year so far. I am no giallo specialist but I was able to pick up some elements early on: the stylish sadism and elaborate choreography of the murders, the fetichism (with masked killer wearing a somehow trademark outfit of the genre, the long coat and black leather gloves), the bright vivid colours, especially red (I am a real fetichist for red neon in films), the naughty scenes in the sex club, and a wonderfully hypnotic soundtrack.

But then something inexplicable happened half way through, with the film losing pace while becoming incredibly more bizarre, with a touch of esoterism. And what was stylish and intriguing became somehow clunky and a little laborious even. In fact, I cannot think of many other films in which inhabit such wildly conflicting levels of quality. 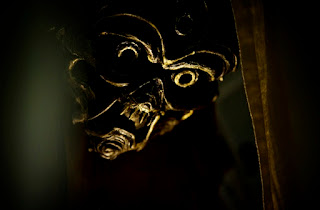 The main problem was some rather unwittingly laughable lines, made worse by some occasional overacting and a dodgy dubbing. The director decided to set the film in the world of international high flying finance, with most characters from various nationalities speaking English with strong European accents, whereas the film would have worked so much better had they all just spoken in Italian, as this had the unfortunate effect of making it all sound a little eurotrashy.

But the dubbing itself is not an excuse for some seriously questionable dialogue in parts. My favourite scene of all has to be when Lisa, after a night of passion with a potential suspect and upon receiving a call tipping her about the potential risk he represents, casually asks him whether he "has erm, bought any books about the occult recently?" with the funniest shifty look ever.

I do not want to say too much to spoil the pleasure, but there is also a part where a character reveals that he did not tell Lisa he suspected ********** might be the killer because "they did not have the time".

Speaking of the occult, everybody's favourite character has to be Joanna in this, Lisa's best friend. While she is decent in her first few scenes, the acting that follows is seriously unconvincing, whether she is smoking furiously (and I mean furiously), telling her best friend who's found out her colleague was murdered that "she'll be alright", or proudly announcing that Prague is the city of the acchrcult. No sorry, the R-cult. The orchcult? I think she meant the occult, we shall never know. 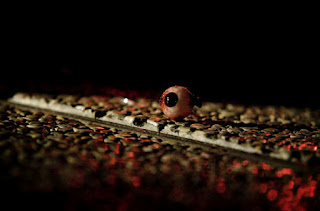 Having said that, bar that aforementioned one scene, Claudia Guerini as Lisa (here lovingly filmed by her husband Frederico Zampagione) gives a committed and layered performance, a mixture of strength,  and vulnerability, with a certain raw sensuality only found in proud Southern European women. She bravely carries on the whole film on her shoulders, and it is refreshing that, for a genre that was often accused of casual misogyny, Tulpa has a strong female character as a lead.


But despite the undeniable technical skill on display, and some obvious qualities, the audience began to laugh, incontrollably, which, I have to admit, at the time, made me feel very uncomfortable for the cast and crew, all in attendance and watching the film. But to be fair, this is nothing compared to what directors are subjected in Cannes or other big festivals (and only yesterday did we hear that Terrence Malic's new film, To The Wonder, was comprehensibly booed in Venice, so nobody is ever safe.)

Tulpa was not booed when the end credits rolled, instead receiving a chorus of applause (possibly not quite for the right reasons.) While the director and cast came on stage, I do not know what they must have made of the reception the film got and the expected Q&A did not take place. The affectionate bad/good film banter does not quite exist much outside the English speaking world and they must have been rather baffled, so I hope they did not take the audience's reaction too harshly.

As revered as they are now, it has to be said that most giallos of the golden age suffer the same kind of flaws, with some approximative acting and a liberal approach to logic and plot, although I do not think the director really meant to push the authenticity by trying to mimic those aspects.

I am convinced that the film could be considerably improved by offering an all Italian version with English subtitles, and editing out a few scenes which slows it down. Perhaps the Frightfest audience, a little drunk at this stage of the festival and in a jokey mood, might not have actually been the best one to offer its world premiere to after all. As for me, I made a beeline for the (incredibly stylish) DP Giuseppe Maio in the foyer, having spotted him on stage earlier, to tell him all the praise I had for his work on the film, and he seemed suitably pleased!

Despite its somehow mixed reception, anybody who is a fan of stylish and bonkers cinema will not fail to enjoy Tulpa as much as I did. 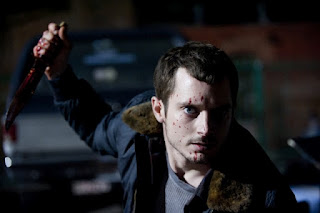 And finally Maniac came on as the midnight screening. I had already seen it at the Cannes Film Festival for its world gala premiere, at yet another midnight screening, and I wrote a review for Cinemart (which you can read here), a rather daunting prospect at the time. Indeed the film only had that one screening at the festival, with no press showing, and I had to word my opinion completely unaware of how it would be received by others. I am pleased to say that it got a great reception at Frighfest, and that it holds surprisingly well on a second viewing, which gave me even more time to enjoy the fantastic work on the cinematography and electronic soundtrack. A real crowd please that had the audience almost scalp themselves out of pure joy.

So a long day was over, and I was getting ready for yet another day of bloody mayhem, featuring an Italian film studio, a haunted house and a singing, flying zombie egg sushi called "Eggy" which we all fell for, as well as a chance encounter with an infamous horror director... Join me on my third day of Frightfest report on my next post.