The Muppets: The Psychotic Dreamed Life of a Man-Child 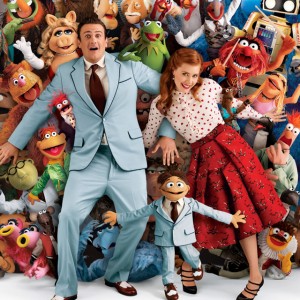 When finally watching the new Muppets film at the cinema, I quickly realised that all was not quite as it seemed. In appearance, this is a return to the Muppets' roots we all know and love (after a serie of derivative sequels), that sees them fight an evil oil baron to win their old studios back, a fight punctuated with songs and dances and celebrity cameos just like in the good old days. Except that, scratch that surface and you will quickly realise that underneath lurks the labyrinthine exploration of a man's psychosis.


So the film is allegedly about loveable Gary (Jason Siegel), his girl-friend Mary (Amy Adams) and his muppet brother Walter, who, while on a trip to Los Angeles, find themselves helping the Muppets to reunite and win their old theatre back, staging a show together.

To me however, it became obvious early on what the film really is about, indeed they were many clues. Gary is in fact a man-child who, obsessed with the Muppets show of his childhood, has never grown up past his early teenage years. And Walter, his muppet "brother", is his subconscious alter-ego, that part of him that will not let go of his childhood. If David Cronenberg had directed this film, Walter would have been a blood-thirsty protuberance under his arm pit. With Tim Burton it would have been a stop-motion animated, wide-eyed creature with striped socks voiced by Johnny Depp. But this is a Muppet film so in here Walter is, well, a muppet.

This fact is clearly represented by a very powerful metaphor in a montage that sees a sane Gary being measured up every year as he is growing taller while his muppet brother never does grow up one inch. Speaking of montages, the film relies heavily on them, as if to show us how fractured Gary's grasp of space and time has become. 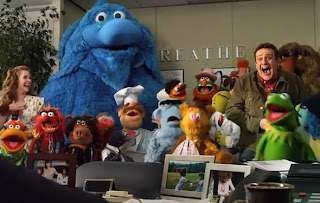 So Gary lives in Smalltown, USA, a town where everybody will happily follow him into a dance and song routine at the drop of a hat. But again, notice the early scene where, after a fantastic musical number as Gary, Mary and Walter are about to drive off to Los Angeles, the whole populace collapses of exhaustion. Why such a strange scene? They have probably played along with Gary's fantasies all these years, in scenes reminiscent of Lars and the real girl, where Ryan Gosling begins a relationship with a blow-up doll and all his friends, families and neighbours pretended it is the most normal thing in the world. It is as if Gary lives in the Truman Show, whose confines here are not a TV studio but the architecture of his own psyche.

And let's focus on Mary before we go any further. She is presented as Gary's girl-friend, yet despite having dated for 10 years, they do not live together and even sleep in twin rooms at hotels! Of course, Mary is not the girl-friend at all, she is Gary's psychiatric nurse/carer, who has played along with his fantasies. And Amy Adams powerhouse performance should be applauded, thanks to the depth and subtlety she brings to such a complex character. While in appearance a model of apple pie wholesomeness, the smiles, the happy face are just a tad too forced to be truly genuine, and the tinge of sadness in her deep blue eyes is all too obvious.

Having dedicated her life to man she will never be able to love and that she might full well lose completely to the grip of madness, tiny cracks appear. Witness that incredible scene where, in an instant of loneliness, and tired of her frustrating and thankless existence, Mary breaks into a song and dance routine in a diner, trying to convince herself and the crowd that she is truly happy being so lonely, fleetingly fleeing into the world of Gary's fantasy, before snapping back into her sad reality. This is most obviously a direct reference to Lars Von Trier's Dancer in the dark, where assembly line worker Bjork escaped into songs and dance as she was about to get hanged. 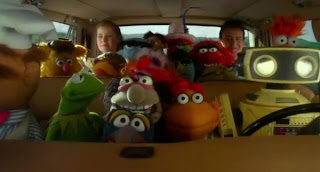 She has most obviously convinced Gary's shrink that, with the right medication and under her close supervision, he would greatly benefit from a trip to Hollywood, and might even regain some grips into the real world if faced with what the Muppets dilapidated theatre truly is, ie a homeless refuge. As such, Mary also acts as the Stychian river boatwoman, helping his twisted mind navigate the murky waters between the worlds of reality and insanity, playing a very similar part to Mark Ruffalo in Shutter Island.

This is certainly not the first time a film has played with the powerful notion of escapism when faced with the ugly world of reality, as recently as with those two recent south Korean masterpieces Poetry and Mother. But the problem with those aforementioned films is that they did not feature any muppets, hence dimming their impact.

That is not to say the Gary's world of fantasy is all rosy. A darker side of his inner psyche takes physical form with the Moopets, a grotesque and deformed incarnation of the Muppets. Among them, Miss Piggy's twisted alter-ego, Miss Poogy, stands out in particular, a menacing figure that looks like an 80's leather tranny straight out of the Oyster bar in Police Academy. 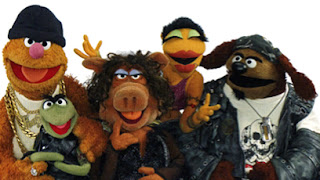 But despite Mary's best attempt, the allures of fantasy proves too tempting for Gary. At one point, the whole party travels to Paris by car, under the ocean. That's right, by car, under the ocean. At a later stage, they travel "by map, because they thought it would be quicker". Stop and think about it for a minute. It is impossible to travel by map, physically impossible.

A later scene seens Gary very nearly reaching out for the world of reality, pushed by Mary to embrace it and leave the Muppets/his childhood behind. Singing the Oscar nominated song, "Man or Muppet", he has visions of his grown-up muppet self, pondering which world to choose. But it is too little too late, and Mary realises all too well, the battle was never one she and him could ever win, and Gary/Walter, having found himself a new talent as a whistler, decides once for all that he is, indeed, a muppet.

In a final scene that sees him dance and sing, hallucinating a street full of backing extras (in a musical number that is the best thing I have ever seen on screen, EVER), he literally flies off the ground and leave his sanity behind once for all, with Mary right besides him, escorting him to the gates of madness, shedding tears of joy. For she knows that he has gone to a better place of celebrities mana-mana singalongs where Whoopi Goldberg and Jack Black are still big names.

I implore you to see this modern masterpiece, this Mulholland Drive of our childhood dreams, this Sucker Punch of furry puppets, this Erasherhead that explores the architecture of our sanity.

Next week I shall demonstrate how Fraggles Rock is a metaphor for the LGB community's fight against oppression, through the medium of songs and dances. "Dance the pain away" scream the credits. Need I say more?