Baftas: I Did Not See That Coming 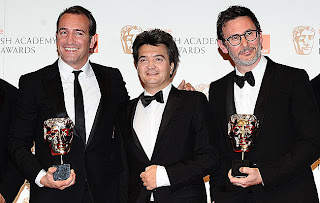 By now you will all have either watched the ceremony or read the results of the Baftas. Full list is here. I tried to predict the winners in 6 main categories yesterday and scored an average score of 4 out of 6. Where did I go wrong? On the one hand I had misjudged the British loyalty for their own acting royalty, which made me predict Gary Oldman and Kenneth Branagh would win it last night. On the other hand I had not So apart from this, was is there to remember from last night?


The ceremony was still incredibly dull, despite the return of Stephen Fry as a host. I am positive I had more fun getting drunk on champagne watching it with a whole bunch of friends than anybody in the room. I like Stephen Fry a lot but his style of verbose and overwritten jokes is becoming a little samey. He lacks the more natural delivery that has made Billy Crystal and Whoopy Goldberg such fantastic hosts at the Oscars.

To make things worse, it had been decided that "lesser" awards would only be shown at the end in a montage. (The ceremony is not live and shown with a large gap). This is not the first time but last night was an absolute disgrace. Not only is it very insulting for all the winners of technical categories, we had a farcical situation where even the awards for Best animated film and Best film not in the English language ended up in the montage! (Nice one for Rango, this true underrated mastepiece, by the way). Next year, BAFTA, make it last 4 hours, and show it in its integrality! And why don't you just celebrate British films only, like the rest of the world does with their own film awards? But I digress.

As I said earlier I did not expect Jean Dujardin to win at all, even though I actually wanted him to, and love that he has won. A strong Oscar campaign across the pond means that we have barely seen Jean doing any kind of media appearance in the UK, leaving Uggie the dog to do all the work over there. And the French actor is a virtual unknown in the UK, having had very few films released over here (OSS 117 and Little White Lies). But I had underestimated his charm, and his very physical and suave performance is so incredible that in the end, he managed to sway the BAFTA members. I do hope that, should he win an Oscar, he goes on and do an impromptu tapdancing number on stage.

Some snarky comments were to be read today in British media about The Artist winning best original screenplay, being a silent film. So what, a script is just dialogues then? Of course it is not, otherwise it would be a book! If anything, it makes a lot of sense that Michel Hazanavicius won both best screenplay and best direction as it the combination of those two aspects that made The Artist the real gem that it is.

So now that we have had the hors d'oeuvre, all eyes are on the piece de resistance, the Oscars in less than two weeks? Will the Gallic charm invasion conquers it all?
at 20:26