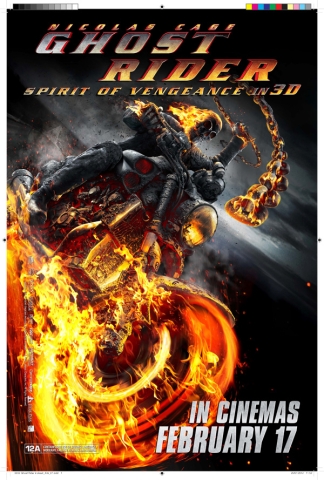 Plot: Johnny Blaze, the half man/half demon is back, this time trying to stop the Devil from taking human form through an evil child.

Review: The first Ghost Rider, while no classic, was an enjoyable and slightly silly adaptation of a lesser known graphic novel with a Faustian anti-hero, Johnny Blaze. A stuntman who signed his soul to the devil, he became a half-man, half-demon that saw him turn into a harbinger of evil justice and collector of souls with a flaming skull at night.


This second film is not a direct sequel and in fact, is so different it is practically a reboot. And apart from the ghost rider himself, Nicolas Cage, nobody from the original cast is back, which is a shame as this means no more Eva Mendes. There surely was a lot of anticipation when this project was announced, mainly because of the directors: the duet Mark Neveldine/Brian Taylor, infamous for the high octane, supremely silly, rather hit and miss yet oddly enjoyable Crank franchise, with the Stath.

With them at the helm, the Ghost Rider franchise was going to be taken into a completely new direction, getting rid of any sort of depth that the first film attempted, to be replaced with campy, OTT fun and non-stop action that has become their trademark. Or that was the expectation anyway. Because it is hard to believe all they have been able to deliver is this dull and toothless disappointment.

It is as if the studios got scared of them and did not allow them to truly unleash the fury we were rightly entitled too. There was more fun and more craziness in any ten minutes segment of last year's Drive Angry (another Nic Cage trashy but fun film whose story bore some troubling ressemblances to this) than this whole film can muster. A muddled story about the Devil attempting to take human form again through an evil child has been seen a million times before, and very little happen along the way to make it remotely original or interesting, despite the globe-trotting through Eastern Europe then Turkey.

The special effects at least have been improved dramatically, with a completely new design for the ghost rider. In the first film, the flaming skull looked like it had been added with crayons at post-production. In here it is a much more convincing effect with a more realistic and gritty looking skull. But the ghost rider himself, in his demon form, does not even have much screen time which is a tragedy. And apart from a thrilling set piece that sees him ride a monstruous, fire spewing giant ghost-crane, there is a tragic lack of action.

And in a further blow to any Nicolas Cage's fans such as myself, the man himself sleepwalks through the whole proceeding, with barely any occasion to unleash some CageRage. A short and exciting scene that sees him ride his bike at ultra speed while his face is morphing in and out of his demon alter-ego almost feels like a metaphor for the whole film, with some CageRage madness attempting to escape with no success. The rest of the cast does not help. The usually fine actor Ciaran Hinds as the Devil spends the whole time stuck into an odd rictus that makes you want to pass him the pepto-bismol. He is also one of the least threatening villains seen on screen for a long time, even Jennifer Aniston as the boss from hell in Horribles Bosses was scarier. And I will charitably avoid mentioning the usually wonderful Idris Elba as a French priest and and his tragic 'Allo 'Allo accent.

I also feel the need to devote an entire paragraph to Christophe(r) Lambert, who has a brief supporting part in this. To an international audience he is a regular face in B-movies, better known for playing the immortal Scotsman with a dodgy accent in the Highlander franchise. In France in the 80's however he was as hot as Michael Fassbender and Ryan Gossling put together, with a string of great parts in zeitgeisty films such as Luc Besson's Subway. So every time we see him in yet another derivative film, it is a stab in our collective memory. In here he plays a priest made to look like a Rosetta stone with some strange markings on his skin. Spare a thought for Christophe(r) Lambert and then we shall move on quietly.

As for the trademark humour that pervades the Neveldine/Taylor universe, all we are left here with is a lame "Jerry Springer is the devil" joke that is about 12 years too late, and the Johnny Blaze peeing fire clip that is here even shorter than in the trailer and feels like it has been hastily added at post-production.

There is a lot I could have forgiven from the men who brought us a 30 feet tall Jason Statham fighting Godzilla: nonsensical plot, over the top action, a CGI deluge... But coming from them, dullness is a cardinal sin. Do yourself a favour and catch up with Drive Angry instead if you have not seen it yet, for some proper trashy horror mayhem.

Ghost Rider: Spirit of Vengance is out in most countries worlwide today.