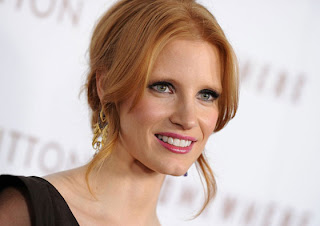 A virtual unkown at this same time last year, Jessica Chastain has been in every other film ever since, the results of many of them getting a delayed release, such as The Tree of Life which was shot over a period of about 27 years, or so goes the legend. Jessica Chastain is exactly what the world of cinema needed, a wonderfully versatile and subtle actress with an ethereal beauty reminiscent of a young Sissy Spacek. The problem with her ubiquity is that despite receiving nominations in most film awards, there are too may films to choose from and spread voting means she is unlikely to win much (except for our very own British Film Bloggers Circle awards!). So it is only fair that a whole film awards is dedicated to her, and I am staging it today, just before the Oscars!

I have not seen it but it took some gut to swap her trademark flaming red hair for some blonde locks. She looks stunning regardless. 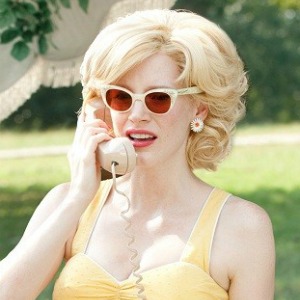 The Tree of Life.

She shines through the film, irradiating the cold light of a near deity, making her the perfect Terrence Malick heroine.

The Tree of Life again. Only Jessica Chastain would have managed to make a scene where a character seemingly flies off the ground looks perfectly natural. For all I know, she pushed the method acting to actually learning to levitate. 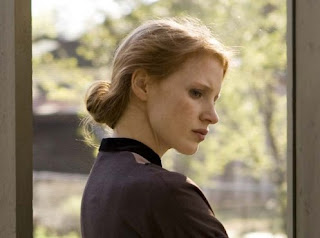 Best film that does not feature Jessica Chastain:

Poetry, that subtle and understated South Korean masterpiece. I was wondering right until the end whether she might turn up though.

Well it is more a mental tornado we are talking about, with the storm taking place in the architecture of one's mind (or is it? I have not seen it!). Still, well done to Jessica Chastain.

Best Jessica Chastain bravery/charitable award for making not one but two films with the same incompentent actor:

Texas Killing Fields and The Debt with Sam Worthington. I have seen rubber ducks and bath sponges with more acting range and flexibility than the Australian Avatar actor. No wonder his bigger part mean his CGI avatar had more screen time.

The Debt, where, as a mossad agent, Jessica Chastain surprises us with a very accurate Israeli accent.

She might only have a minor role in here, but more than holds her own facing acting royalty such as Vanessa Redgrave and Ralph Fiennes. 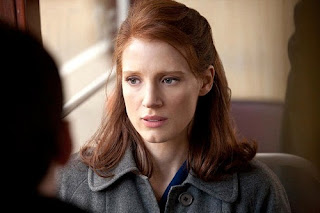 Best film you thought was not going to feature Jessica Chastain, only it DID!

I went into this screening at the London Film Festival without having read the full credits list. Imagine my surprise when, yes, her name popped up on the screen! Speaking of credits, I miss the times where names used to fly across the screen leaving shiny silhouettes behind, like in all the Superman films. But I digress. Who knew she would end up on a modern reimagining of this lesser known play of the Bard, transposed in the Balkans.


Best film with Jessica Chastain found on dvd at the Startford Sainsbury for less than a fiver:

As I was mentally compiling this list of awards while food shopping, I came across The Debt for a fiver at the Stratford Sainsbury. I did not buy it. It actually is not a very good film.


The Tree of Life

It might seem like an easy win. There is only one Palme d'Or allocated every year. But then again, sometimes there are two, like in 1993 and 1997. So well done to Jessica Chastain. 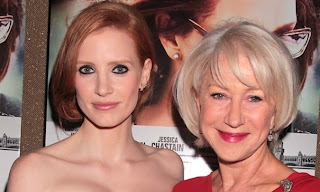 It has become a tradition that is spreading in film festivals to have a "surprise" screening where audiences have to take a chance and buy a ticket for a film without knowing what it would be. At Empire Big Screen last year, there were no less than 3 surprise films. And I shouldn't have been so surprised when one of them featured Jessica Chastain, through some basic laws of probabilities.

So, again, well done to Jessica Chastain. I hope she wins again next year.
at 14:19