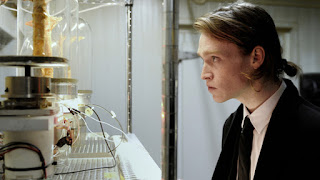 Nearly half-way through the festival and I have realised that my line-up this year has been pretty heavy on  "cult" films. Experimental, South Korean, Japanese, downright horrors... Made all the more easy by the different strands introduced in the festival, including, you guessed it, the cult one but also the thrill one. And I have two more of those cult/thrill films reviewed in this post, two very different ones however: A Fish and Antiviral.


I feel the need to reiterate in every one of my posts that South Korean cinema is currently my favourite in the world, for its inventiveness, the constant quality of its scripts and visual skills. Yet I was a little nervous about A Fish, directed by Park Hongmin, a young director who is actually still in film school. The LFF fooled me once already, two years ago, gushing about End of Animal in their programme, a film also directed by a very young director still at uni, and who, at the Q&A, candidly admitted he could not believe his film had been picked for the festival, and saw plenty of flaws in it. And so did I, as after an intriguing opening, it turned into a two hours, drawn out snooze fest. So when the programme announced a Fish as basically the future of South Korean cinema, I was dubious.


The good news is it is a better film than End of Animal, with a tighter grip on the script, and offering a generally more assured direction. But the future of South Korean cinema? I think not, I hope not even! In it, we follow a teacher whose wife has disappeared, and who is given a tip about her location. It emerges that she has become a shaman in a very odd island.

The film starts off promisingly. Obviously made on a shoestring budget, it creates an unusual, almost menacing and rather unique atmosphere. But the middle part seriously drags, to the point of boredom, not helped by a particularly annoying character of a P.I./sidekick. The story is also punctuated by some seemingly unrelated scenes with two fishermen at night, becoming increasingly surreal as their banal banter turns more and more philosophical, and culminating with the apparition of a screaming fish, whose strident howling nearly made my head explode.

A Fish regains its footing (so to speak) in the final act on the island. I was making some mental notes while watching this, labelling it The Wicker Fish meets Waiting For God(ot), given the script developments. And this is where the film regains some of its rather unique atmosphere. It is not a horror or not even a scary film, but the cult encountered on the island is seriously sinister despite the script using none of the stereotypes of the genre films. Without spoiling it, it goes all a bit Twilight Zone with a metaphysical touch, with a satisfying ending. Having said that, I have since been told that the whole idea has been ripped off from a recent South Korean film, putting a downer on things.

Strangely enough, the film was shot in 3D, which yields some uneven results. While the 3D is a lot more satisfying in parts than any post-converted blockbusters, other times it is just blurry. And then on to Antiviral, which I had missed in Cannes and was rather excited about. Directed by Brendan Cronenberg, son of David, it looked like a throwback to the kind of brilliant body horrors the Canadian master used to make in the 80's before becoming boring.

Antiviral has a fascinating concept: in a nondescript near future, society has become so obsessed with celebrities than clinic are now offering its clients the chance to be infected with whatever diseases they have harvested directly from them, so that they can feel closer to them. One of the clinic's employee, Syd (Caleb Landry Jones), runs a clandestine operation on the side, smuggling up viruses for the black market. But it all goes horribly pear-shaped when he infects himself with the mysterious germ of a starlet who subsequently dies, and a race against time begins for him to avoid the same fate.

There is so much to enjoy in Antiviral. Despite its low budget, It just looks fantastic thanks to its assured art direction, with a clinical, vividly black & while palette (even though the film is in colours, if it makes sense). As I was saying, the concept is brilliant, and there are some wonderfully disturbing scenes there and then. And Caleb Landry Jones is a revelation in the lead, his haunted performance a perfect match for the bizarre universe of the film. But unfortunately, it never quite pays off as much as you would have hoped for. There is a fine line between setting a mysterious, slow-paced and oppressive atmosphere and just being dull, which the films sadly crosses many times. And the way the script develops is not all that interesting ultimately.

Director Brendan Cronenberg was present for a Q&A and was asked the inevitable question about his father influence. He said he found himself in a catch 22 situation: had he gone for a rom-com, critics would have seen that as a rebellion. But you cannot deny that many of his scenes are direct tributes to his father best known work. I am thinking in particular  of a scene featuring a living device partly made of flesh that could have come straight from Videodrome. And the whole concept and themes of body horrors found in Antiviral are the closest that anybody has come to the world of Cronenberg Sr.

It will be interesting to follow him for his subsequent films. The question remains whether he will be able to develop his own unique style, or whether he is condemned to remain in the shadow of his father.