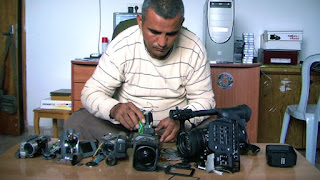 With a barrage of film accolades already awarded to 5 Broken Cameras including the Sundance World Cinema Documentary Directing Award, the quiet Palestinian introverted film maker Emad Burnat's work along with his Israeli co-director Guy Davidi has really struck a chord amongst critics. The documentary is centred upon what essentially was meant to be Burnat's home movies.


When his fourth child, Gibreel was born in 2005 Burnat wanted to see the world through his young son's eyes and began filming both his family and his Palestinian village Bil'in situated on the contentious West Bank. As the only 'cameraman' in the village he began to broaden his scope to documenting village events and particularly the village's opposition to the Israeli infringement onto Bil'in farmland for new Israeli settlements. Bil'in has been noteworthy in that the village has always maintained a peaceful protest against the occupation of their farmland including the building of a large fence separating the villagers from their olive trees. The '5 Broken Cameras' of the documentary's title refer to the five cameras that Burnat used over the course of filming the hundreds of hours of footage that now has been edited to make up approximately 80% of this documentary.

We first meet the young family going about their regular quiet lives, picking olives together, playing with their boys. However, the political and geographical background to this domesticity is the regular sound of gun fire and the near constant supply of tear gas used by the occupying (from the Palestinian view point of view) Israeli forces that patrol the area. What is striking about the Israeli soldiers is how young and almost unenthusiastic the Israeli soldiers seem when carrying out their duties. Their solution to most situations appears to be to shoot, throw tear gas liberally or physically pick up and carry away protestors. There is even a time, filmed by Burnat when Israeli forces came to Bil'in at night to arrest children.

Burnat also follows the peaceful though, very active protests of his friends Phil and Adeeb. Phil is tall and light hearted though completely committed to a campaign of peaceful protest. Adeeb is a non-publicity shy extravert, loudly and often knowingly dramatically refusing to accept the illegal settlement of his farmland. Burnat through his narration feels that his camera somehow protects him in the many risky situations he films during fracas with the military.

As he supplied footage to a number of news agencies he also had a press pass. However, there are still five broken cameras. Some arebroken from over use and others by taking direct gunfire, saving Burnat from being shot, but destroying the camera being used. Never meaning for his work to be shown beyond his home or village, Burnat has created an intimate portrait of real life in Bil'in. Politicians and non-local peace activists are included in the film but are kept on the periphery. The camerawork is amateurish as Burnat is self-taught. Though this is somewhat irksome in the beginning, the style becomes endearing as the audience realises just how brave Burnat often is in where and how he continued to record events.

His co-director Guy Davidi shaped the film's structure and contributed footage of Burnat after he was very critically injured in a car accident and during Burnat's slow recovery. Davidi also encouraged Burnat to include the understandably tensions between Burnat and his wife, when she feared for the safety of her family due to her husband's mission to keep filming.  The narration by Burnat has also been shaped by Davidi who wanted the have the reluctant Burnat, talk about his feelings towards the situations shown in the documentary. In short, this is nothing less than brave film making where the film makers are active participants of the story they are there to capture.

The narration reveals Burnat's belief or wish that his mission to film events will bring a meaning to what has happened in his village. 5 Broken Cameras is also an example of how film can bring two traditions or societies together in positive action. Burnat as a poor Palestinian farmer worked side by side with the well educated Israeli Davidi who assisted Burnat in receiving medical help in Israel after his life threatening car accident. The repetition of the sound of gun fire and the sight of tear gas becomes almost blasé and no longer shocking due to it being so common to the young Gibreel and the audience.

People, the audience have become very familiar with are arrested or even shot while the directors were filming. The personal nature of the film makes these tragedies a far more intimate experience for the audience than a statistical one. Israeli soldiers and settlers do not remain faceless and their view of the world is shown indirectly but interwoven with the microcosm of this particular Palestinian village. 5 BrokenCameras is an example of intimate documentary film making that has a role to play on the international political stage looking at how we can  work towards peaceful non-violent solutions to decades old social problems.

Five Broken Cameras is out on the 19th of October 2012 in the UK.  Directed by Emat Burnat & Guy Davidi.