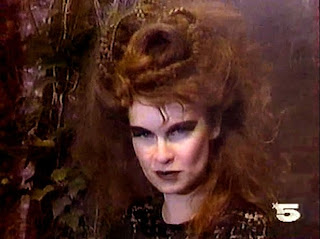 Most of you will remember or have at least heard of America's 80's priestess of horror, Elvira, Mistress Of The Dark, with her voluptuous curves and over the top gothic persona. On top of a popular TV show, Cassandra Peterson (her real name) also portrayed her character in a serie of films. But did you know that, in the 80's,  France had found its unlikely answer to Elvira, in the form of Sangria?


It might sound odd for a priestess of horror to be called like a cocktail. Until you realise that "sang" means blood in French, and the choice of name makes a lot more sense. For the people of my generation, her name will evoke memories of forbidden evenings spent watching Sangria introduces some classic horror films, completely inappropriate for our age. 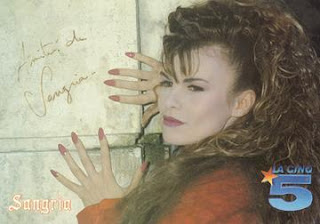 Elvira might have been typically American, brash, OTT in many ways, but Sangria was typically French. Looking at times like an extra from a Mylene Farmer video, a sort of gothic new romantic philosophy French student, she was sultry and seductively mischevious.

The production values of her show were not exactly high, nevertheless, it was a bold move from a French channel to devote a whole prime-time programme to horror, a genre that, especially at the time, was not taken very seriously in France. And it had its inspired moments. One edition saw her hi-jack a popular prime-time game shows of the era, machine-gun the host and take over, replacing the "It's a Knockout" trials with her own, bloody ones (Think Saw before its time).

And what inspired films we were exposed to! I remember congregating the next morning with my school mates, giving shifty and suspicious looks around us to ensure we were not being overheard, discussing the horrors we had witnessed, Halloween 3, Amityville, The Fog, The Thing, The Abominable Dr Phibes... 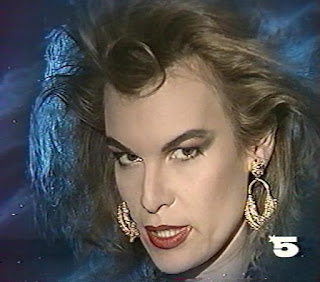 And then there was the famous Cannes film festival incident, when Elvira, in town for a publicity stunt that saw her driven along the Croisette in a coffin with wheels, flatly refused to meet Sangria.

Her show, Les Accords Du Diable (which means something like The Tunes of the Devil) was not to last very long, as the channel which hosted her pretty much went bust (having bought and ruined Twin Peaks for everybody in France by showing after 11pm) and that was the last I heard of her.

I have often wondered what became of her. And a quick search in the internet revealed that she had a rather interesting career. After a lull that saw her a fixture on the teleshopping circuit, she became a jazz singer and can still be seen on the stage in Paris now and then for her jazzy show.

But I shall never forget how, when I was a pre-teen and a massive fan of her, Sangria became a sort of naughty bigger sister, making me discover a forbidden world of gore and horror. I enclose a video from Les Accords Du Diable, which sees her philosophise about horror as if she was declaiming a Chateaubriand poem, in an inimitable and charming French fashion.