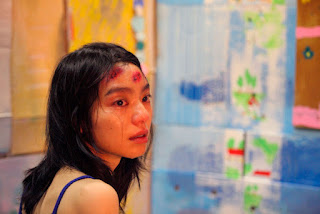 Plot: Kotoko (played by Japanese pop star Cocco) is a single mum on the verge of a catastrophic mental breakdown, struggling to look after her young son yet devastated at the thought of losing him, as she is suffering hallucinations and feelings of persecution from a perceived hostile outside world.

Review: Shin'Ya Tsukamoto is most famous in the West for having directed two of the craziest and most utterly deranged films of the last decades: Tetsuo The Iron Man (1989) and its sequel Tetsuo 2 The Body Hammer (1992), which are both being re-released on DVD in the UK by Third Window Films, the same company which is releasing Kotoko. Those films celebrated the union of flesh and machine and can be described as early days David Cronenberg on acid, which is quite an achievement. Low in plot but high in demented visual flourishes, they have since both become cult films with a strong following. I personally have a preference for the first one, for its impeccable experimental black & white industrial style, as opposed to the second one whose colourful dayglo esthetic has aged badly and makes it looks like a bad 90's dance video.


So I was particularly curious to see how the Japanese director would tackle this more character-focused story of a descent to madness. Was he running the risk of coming across as more respectable and therefore boring, as David Cronenberg has recently? Far from it. In fact, its most interesting aspect is that Kotoko is all you would expect from a psychological drama/horror from Tsukamoto, having lost none of his unique style but with an extra emotional depth.


Kotoko has been compared to Possession and it is easy to see why, with a similar focus on a woman spectacularly losing her grip on reality, but while Andrzej Zulawski was going for a colder and more detached approach, here the visual style is very different, more akin to a home video, with lots of close-ups, making it feel even more painfully realistic and emotionally affecting. If anything, I would  compare it more to Eraserhead, not for its visual form which is nothing alike, but for its depiction of domestic life alienation. 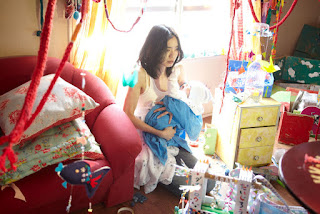 We never know what triggered Kotoko's madness bar a few hints: the pressure of being a single mum, unhappy previous relationships... and it makes the audience feel even more powerless as we witness her descent into insanity. In his own unsual ways, Tsukamoto illustrates the plight of a single mum with more truthfulness and honesty that anything Hollywood or even quirky indie films have ever produced: the constant need for attention of her son, the scare of dropping/hurting/neglecting him, the paranoia of being judged by all, the loneliness...

And it is a harrowing depiction of insanity, made all the more disturbing as reality and hallucinations are intertwined, without the audience always knowing what is real and what is not. This makes for a very claustrophobic and intense atmosphere that mirrors Kotoko's fragile state of mind, emphasised by an ever-present deluge of industrial sounds, interrupted solely when Kotoko breaks into songs, the only times where she seems to be at peace with herself and the world.

An interesting plot development sees her starts a relationship with a renowned writer (played by Tsukamoto himself), which far from dragging her out of her insanity, only makes things worse as her not too balanced new lover allows her to hurt him and indulge in her own madness, which also involves self-harm, the only way she can make herself feel alive.

Just as I was writing before, Tsukamoto's touch is strongly felt throughout, being the assault on the senses that he subjects its audience to (especially the hearing), the unrelenting intensity and the rare but sharp outbursts of violence which punctuate the film. There are even a couple of nods to Tetsuo: one involving the fusion of a human body and some Christmas lights (you have read this right), and a stop-motion scene as Kotoko is hallucinating, which has a strange amateurish poetry to it, as if a child's creative workshop was coming to life.

His willingness to shock is also still present. I am thinking of one scene in particular, which had me staring at the screen in utter shock with my mouth open, as it pushed the boundaries of what can be shown on film, and which would have the Daily Mail up in arms if only its contributors and readers watched films with subtitles on. 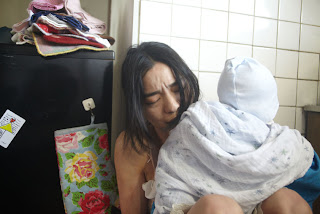 Yet none of it feels gratuitous or exploitative. For, as insane as Tsukamoto's universe might sound, he has nothing but compassion and understanding for his fragile heroine. And Cocco as Kotoko, illuminates the film with her presence, a strong and committed performance which is all the more remarkable as, while she is a renowned singer in Japan, this is her first film as an actress. She never allows herself to go completely over the top and actressy, keeping her character believable at all times, no matter how insane her behaviour. On top of playing Kotoko, Cocco has also had her hand in the script, the art direction etc... making her contribution on this project just as important as the director's.

Kotoko is a unique and unforgettable piece of mental horror/psychological drama, and one of the best films to be released in the UK this year. I have already said that about Beauty, also released on the 8th of October. So a particular good day for a more demanding and affecting type of cinema. Although a double bill of those two might leave you some mental scars!

Kotoko is released by Third Window Films, and is out on DVD/Blu Ray in the UK on the 8th of October.