London Film Festival 2012: In The House/John Dies At The End 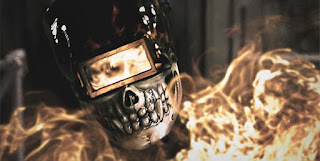 Variety is the name of the game, and this is my favorite aspect of film festivals, watching some widely different films back to back. And you cannot do any more different than In The House and John Dies At The End, both from directors who I admire although who have yet to come up with the masterpiece which to me would propel them into my A-team of directors, high up there with the Lynchs and the Cronenbergs. Did they deliver with their new films? SPOILER. They did not.

First of all In The House, Francois Ozon's latest. The French director started off his career so well, and I am well aware he has many fans, but to me he has never really fulfilled his early promises. He seems a little unfocused and apart from his trademark whiff of provocation, I do find that his films lack of personality. I am still waiting for him to beat his early short film Regarde La Mer and his first film Sitcom.

In his latest, Fabrice Luchini plays a bored literature teacher and frustrated writer who takes an interest in one of his student with a promising skill in storywriting. He then encourages him to describe his interaction with an middle class family he has an unhealthy fascination for, and the line between reality and fiction blurs more and more.

In The House is one of those very unusual films which I like less and less the more I think about it, it is usually the other way round. At first I found the narrative device very clever and attractive, never quite knowing what was true and what was imagined in what we were seeing, as the teacher and his student shaped up what had happened/was to come, manipulating their audience like some puppetmasters, sometimes even having the characters commenting what we are seeing in a scene, a touch of surrealism that reminded me of Bertrand Blier in his heydays (a much superior director who sadly lost his ways round about 1993). 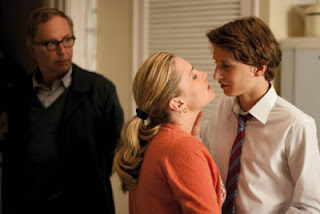 But then this plot device, once set in motion, quickly seems to go round in circles, and does not pay off as much as it should have. Worst, Ozon, through the character of the student, sets his sight on a middle class family, which he is clearly fascinated by despite his superior attitude towards them, pretty much the same attitude displayed by the director.

It has to be said that the term "middle class" does not quite have the same connotation in French and in English. In actual fact, a truer translation for middle class in French would be "bourgeois".

The French director has much fun lampooning the aspirations and quirks of this seemingly average "middle class" family, but it quickly turns repetitive. Chabrol could do this in his sleep, and make it compelling, but Ozon is no Chabrol. There are also some unexpectedly broad jokes about the contemporary art scene, with Luchini's wife (played by Kristin Scott-Thomas) playing a gallery manager, and I certainly did not expect Ozon to go down such a populist road. I have also come to realise that ANY film featuring a contemporary art gallery MUST feature the scene of an opening where the manager will invariably claims "They loved it! No, nobody's bought anything yet". I saw this exact same scene in Maniac a few months ago (with a minor difference: Kristin Scott Thomas does not get scalped.)

And as if the director wanted to remind us that he's still got it, he introduces a rather timidly provocative scene that still had the audience of the screening (mostly made up of OAP's) audibly gasping for air through their dentures. The ending is particularly unsatisfying, wrapping it all up in a rather OTT and barely credible fashion.

Francois Ozon's cinema seems to have become just as bourgeois/middle class as the family he is making fun of, lacking of any kind of invention and fantasy. His recent films have an air of "quality French cinema" to them with a barely present whiff of provocation left to them. I mourn the days of Water drops on burning rocks.

As an aside, there is a rather grating aspect to the London Film Fest, the older audience who mostly flock to matinee screenings of French films, probably assuming it will be all quality literary adaptations. They're grumpy, they seem to regard anybody under 50 in the audience as the enemy, and their mental tut-tut was deafining during a few risqué scenes. Best avoiding matinee screenings of French films in the future. 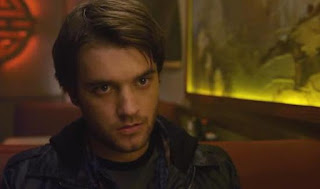 On to a very different screening, John Dies At The End by Don Coscarelli (Phantasm, Bubba Ho Tep). While I was dubious when new festival's director Clare Stewart introduced some strands to the festival such as Love, Thrill etc... there is one which I welcomed with open arms: the Cult one. While it might sound a little early and arbitrary to label some films as cult, what it really meant was that the festival opened up to genre and trashy films which might not have featured in previous years.

Indeed, the audience felt more like an excitable Frightfest one as we were all taking seats in the gorgeousness that is Screen 1 at the Hackney Picturehouses (another and welcome new decision by Clare Stewart was to spread the screenings onto more satellite and local cinemas within London), and we all shrieked with excitement when the director actually turned up, having made to trek to East London.

But what of the film? Ah well... The adaptation of a cult film of the same name, it started of promisingly, with a demented scene featuring a meat monster and one of the best visual jokes ever involving a door, do not let anybody spoil it for you. In John Dies At The End, two friends, John & Dave, discover a new drug, the "soy sauce", which allows an enhanced sensory perception and clairvoyance, with users losing grips on reality, experiencing out of body experiences and even travelling through wormholes thanks to its dimension shattering effects, with the two leads battling up demons and interdimensional foes.

Sadly the film is an utter mess, one which would probably be best enjoyed with the help of some substances, such as the Soy Sauce the characters spend their time on. There is mysterious and there is just messy, and it pains me to say that the director barely manage to keep its audience interested, as one non-sensical scene follows another aimless one with precious little tension.

Indeed there is an art to the surreal, and then there is splattering the screen with just about anything, tying up random elements of horror and science-fiction with little pay-off. Worst still, because of the low budget (and I fee particularly bad saying this, considering how hard it has been to get the meagre funding together, as the director explained at the Q&A), the cheap special effects and stories of demons being vanquished make this appear like an episode of Charmed/Supernatural. And to me, to be cult, this kind of trashy horror/sci-fi comedy would have required a much more frenetic pace which is cruelly lacking.

Does John Dies At The End? Maybe he does. Maybe he does not. Maybe he dies at the start. I guess it depends on which plane of reality you are presently. Makes no sense? Take a hit of Soy Sauce.

Don Coscarelli turned up at the end for a Q&A and he is a wonderful presence, taking time to answer all of the audience question, noting how passionate (even if limited) the audience for that kind of film is, a sort of love and adoration very few other genre benefit (although the fanboy phenomenon is widening, as witnessed with the growing Paul Thomas Anderson's fanbase). He lamented not having been able to make more films, such is the struggle to get any funding, and explained how he had to cut so much material from the book which would have been so expensive the film.

Finally, he even dropped a hint about a potential Phantasm 5 (there is a Phantasm 4?! I must that!), saying that Angus Scrimm (who has a cameo here) was still in shape and up for it. And as the Q&A ended, he had all the time in the world to pause for pictures with fans, sign books, answer questions, chat with them... I might not have enjoyed his film but there is no doubt he is a top man! As for me, the quest for that ever elusive great film at the London Film Festival this year is becoming more pressing!