The Soul Of Flies Review 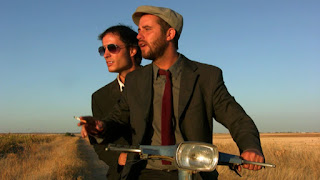 Persistence is certainly needed when you are a fan of independent cinema. The Soul Of Flies was presented at the London Film Festival last year, and I missed it as I caught the notorious LFF Flu. Then it had a very brief run at the ICA in London earlier in the year, a cinema whose tragically uncomfortable, crammed "seats" (I use the term loosely) have left some permanent scars in my body (and I've braved it again for Blancanieves at this year's LFF, aka one of the best films of the year, worth all the mental/physical ICA's seats scars). So I have finally caught up with The Soul Of Flies, and what a treat it turned out to be, well worth the wait!

In The Soul Of Flies, two half brothers who did not know each other, or even OF each other, meet for the first time to attend their philandering father's funeral, which is taking place in his home village. Having arrived at a train station from which no trains ever seem to pass through, they decide to make the journey to the wake by whichever means they can across the Spanish countryside, and encounters a gallery of unusual characters along the way.

The Soul Of Flies is a small film, but that is not meant as a criticism, far from it. Shot on a shoestring budget, director Jonathan Cenzual Burley did just about everything in it: editing, cinematography, script, and he even acted in it. Yet the audience never feels any of the limitations as a result. He is in full control of it, the cinematography of some sweeping Spanish landscapes is stunning and the film is a visual feast, never looking cheap, a real case study of how to make the film you really wanted with such a tiny budget. Aspiring filmmakers, take note.

There is a wonderful, absurdist poetry on display, in the tradition of Spanish surrealism, with a nod to Beckett too. The brothers meet a woman who is trying to paint the scorched countryside by throwing watermelons at it, the dead come back to life, a troop of musical robbers wanders the roads, a suicidal narcoleptic walks around in his PJ's and fall asleep while standing up... 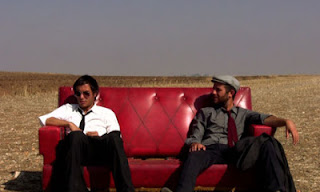 I have to admit I had a slight worry the film would follow a rather stereotyped path, as when we meet the two brothers, their personalities seem to be broadly painted. One of them. Miguel (Javier Sáez) is a no-nonsense urban type, the other one, Nero (Andrea Calabrese) has a more care-free attitude, and as you might expect, they clash at first. Yet we are mercifully avoided any kind of sentimental excess. Of course the brothers, at first distant, get to learn about and appreciate each other across the course of the film, but the script, while slight, skillfully evokes their burgeoning admiration and respect for each other with much understated poignancy.

There is almost a lesson in here on how to take a break, take life at a slower pace and enjoy what it throws at you as it comes along, but it never feels patronising or heavy-handed, and by the end of the film you'll be wanting to leave everything behind you and go on a soul-searching journey in the Spanish countryside!

Fan of Spanish cinema and surrealism will enjoy this immensely. The Soul Of Flies is out in the UK on DVD on the 22nd of October. You can get it on amazon through this link (I'm not getting any commission out of this, I am just being helpful!)