The Vault By Dan Bush 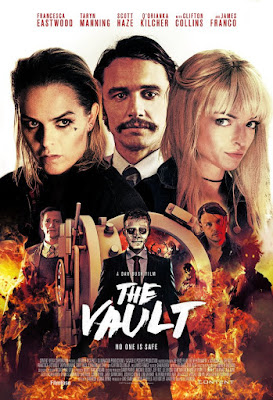 Directed by Dan Bush (The Signal, The Reconstruction of William Zero), The Vault is a fast-paced, violent and at times simply baffling heist movie with a twist. Mixing the supernatural with the usual heist narrative fodder, the film attempt a new approach to this tried and tested formula, but ultimately falls at the first hurdle by its inability to offer a compelling or coherent enough story.

James Franco, Taryn Manning and a whole host of brilliantly talented young Hollywood actors are  wasted on this deeply confused small budget production, which sadly for its makers can’t quite decide what it wants to be and ends up looking messy and rather confused.


The action takes place in a bank where a group of desperate individuals find themselves roped into a robbery to help a member of their gang out of a difficult situation. Taryn Manning, doing her usual hillbilly schtick, plays Vee Dillon, an all swearing all shouting tattooed nutcase who is joined by her equally damaged sister Leah (Francesca Eastwood), and their more level headed brother Michael (Scott Haze) in attempt to rob a bank. As Michael, his sisters and two more gang members rounds up the employees and hold them hostage, the group soon discovers that the vaults are almost empty and will have to content themselves with a few thousand Dollard instead of the big loot they’ve been promised.

Enters James Franco, a mysterious bank employee named Ed Maas who, in attempt to defuse an already volatile situation, informs the robbers of the existence an old vault in the bank’s basement. The Vault is rumoured to hold more than enough money for everyone to go around and will hopefully keep the gang from harming the hostages. Soon the group start wondering if they’ve been set up by Maas when strange things start happening around them.

Bush does a decent enough job with a deeply flawed screenplay which in absence of a decent storyline, resorts to predictable jumps-scares and loud thumps, which we sadly have the whole Conjuring franchise to thank for.  Franco et al put in some deeply convincing performances. Manning in particular, is mesmeric as Vee, as is Scott Haze who has great presence despite being given very little to work with.

The Vault may score some points with those who are easily impressed by this particular brand of supernatural horror, but it ultimately fails to make a coherent enough point and sadly ends up looking a little confused. A disappointing movie, but worth catching if mindless horror is your bag

The Vault is on general release Friday the 8th of September
at 11:56