The Exception by David Leveaux 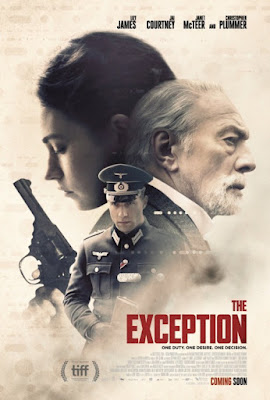 
History is told through the prism of the Jeffrey Archer School rather than Hilary Mantel’s in this waste of a great cast. If you had the likes of Cristopher Plummer, Eddie Marsan and Lily James available to you surely you’d ensure that the story you told maintained some vague grip on historical reality. Yeah, I know this is escapism but puh-lea-se! Add Jai Courtney and Janet McTeer and the idea that a terrible waste of effort and talent takes root.

From all accounts the deposed Kaiser Wilhelm II was a vainglorious and egotistical man; sure in the capable hands of Christopher Plummer elements of that personality come through but, in truth, he appears more like an older Von Trapp, irascible but lovable with a genuine distaste for them Nazi bad guys. Eddie Marsan turns up as Himmler at one stage, playing the part straight out of the ‘Allo ‘Allo acting rule book, and I found myself shouting “you’re so much better than this!”

The Exception is, of course, Courtney’s character, the “Good German”. The honest German army officer who hates the SS, this is early 1940 at the height of Hitler’s popularity, who is given the post of head of the exiled Kaiser’s bodyguard, and basically goes against everything a German soldier stood for at that time.

Meanwhile Lily James is naked with the first five minutes, being taken from behind by the Good German in what is essentially rape, or coerced sex if you wish to split hairs. It doesn’t matter that she is a spy; and Jewish; and a widow. The idea that in 1940 a woman would have cheerfully submitted to a hunky invader beggars belief.

It’s all tastefully shot, period detail observed but truth be told it’s not an exception, it’s too run of the Mills and Boon for that.