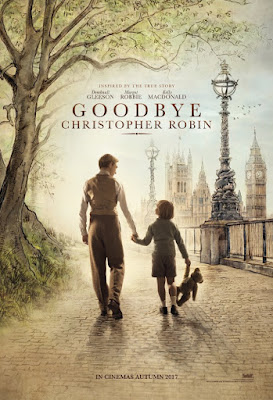 
Simon Curtis’ Goodbye Christopher Robin might not be one of the most perfectly executed films, but what it lacks in the direction stakes, it definitely manages to make up for with its genuinely heartwarming and deeply affecting storyline. Written by Frank Cottrell Boyce and Simon Vaughan, the film offers a beautifully nuanced account of the story behind one of the most loved children’s books in history and the boy who became symbolic of an idyllic childhood in the English countryside in A.A Milne’s Winnie The Pooh books. Recounting the story behind the creation of all the characters who became part of most people’s childhood, the film present a flawed yet charming story arc which is certain to move its audiences to tears despite its obvious shortcoming.

Recently back from WWI and suffering from Post Traumatic Stress Disorder, Alan Milne (Domhnall Gleeson), a once celebrated WestEnd playwright, finds himself suffering from writer’s block and uninspired by a city he has grown tired of. After the arrival of his first born Christopher Robin, a boy who he and his wife Daphne (Margot Robbie) instantly abandoned into the care of dutiful nanny Olive, played brillianntly Kelly Macdonald, Alan moves the family to the Sussex countryside in the hope of writing again. Despite Daphne’s constant badgering, Milne announces that he plans to write an anti-war novel, a novel which in the end never really materialises. Left alone with Christopher, after an argument with Daphne, Milne finds himself transported into his own child’s imaginary world of forest animals and toys which eventually prompts him to write the story of Pooh and all his friends with the help of young Christopher.

Curtis does a fantastic job in transporting his audience into a complex imaginary world of magical enchanted forests and childhood innocence. By bringing these much loved childhood favourites to the screen, the director even succeeds in allowing those of us who have loved Pooh et al, to relive our early years. Gleeson’s cut glass English, although not always perfect, shows just how impressive the actor’s range has become. However, Robbie sadly fails to convince as Daphne with her inconsistent delivery and at times rather jarring accent. Will Tilston as young Christopher has to certainly qualify for one of the most accomplished child actors of our time with his beautifully knowing delivery.

On the whole, a wonderful film which will having you sobbing your heart out by the closing titles, but only if you allow yourself to go with the sentimentality attached to its subject matter. Not perfect by any means, but definitely worth catching for its heartwarming premise alone.

Goodbye Christopher Robin is on general release on Friday 29th of September
at 14:11