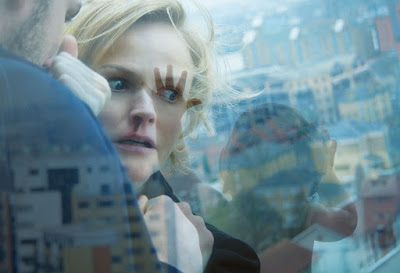 What's it all about?
Charlotte (Maxine Peake) is laser focused on her career, but when she resigns from her job after failing to get a promotion she feels is due her she takes her frustrations out on her cleaner Maya, accidentally killing her. Disposing of the body, she discovers Maya's baby daughter in her car and decides to keep the child while covering her tracks.

Why haven't you seen it?
Like so many of these entries, this is another story of a low budget film getting a low key release and, unless you're deliberately seeking it out, being very prone to getting lost in the stacks of new discs on the shelves each week.

Why should you see it?
Maxine Peake is one of our finest actors, but she does relatively little film work, instead supplementing a flourishing stage career with TV work in which she's always great, but the whole product can be of wildly variable quality. The chance to see her not just toplining a film but dominating it, often alone on the screen, is a rare one.

Peake is, typically, excellent here. Her Charlotte is all hard edges and drive, uncomfortable when even a moment of her time is taken away from work, when a colleague brings her new baby into the office. This is a tough character to nail the tone of; she has to be hard enough that we believe the way she jumps to the conclusion that sets in motion the split second in which she ends up killing Maya and yet we can't lose all sympathy for her. Peake balances this brilliantly on a knife edge. She doesn't completely change when Charlotte decides to keep the baby she decides to call Rosy, but she just begins to soften the character in a few moments, but but her chilly side returns and she becomes ever more desperately calculating when she realises that CCTV gives her another problem to take care of. 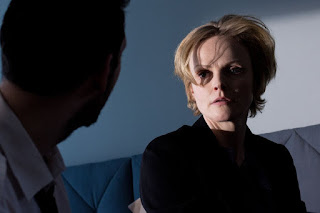 That problem comes in the form of Blake Harrison, making a convincing break with his comedy roots as Roger, a CCTV operator who realises that he could turn this situation to his advantage. The scenes between Peake, Harrison and Christine Bottomley, impressive as Sarah, Charlotte's flightier Sister, called on to help with the baby, are incredibly tense. Roger skirts close to the line of telling Sarah the truth of what's happening, and every laugh, every friendly gesture, carries threat just below the surface.

Director Steve Reeves gives the film a rather chilly look, emphasising the impersonal feel of Charlotte's apartment; all empty cupboards and minimalist design, reflecting a life defined by work. We seldom leave the apartment once we first see it, but this is also the impression one gets of London from the way Reeves frames the film; a city full of people passing each other and looking the other way. Roger essentially says as much late in the film.

Morally complex, extremely well acted and taut and tight at just 89 minutes, Keeping Rosy is highly recommended if you've seen Maxine Peake in the likes of Silk and The Village and want to see her carry a feature with that same assurance and talent.

How can you see it?
There is an extras free DVD available from Metrodome, but right now you can see it on BBC IPlayer
at 23:12