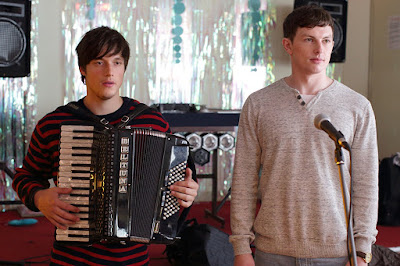 Every summer offers up a new crop of coming-of-age films. Audiences can sit down and travel down avenues of youth completely unrecognizable to them on the surface, but cut through emotionally because growing up is a universal story. It is perhaps the most overtly relatable genre that there is. The coming-of-age film, at its best, is less of a genre and more like a home movie showing you memories that you’d forgotten.

Set in Scotland, Philip John’s Moon Dogs tells the story of step brothers, Thor (Christy O’Donnell) and Michael (Jack Perry-Jones), as they travel from Shetland to Glasgow so that Michael can fix his relationship with his girlfriend Suzy. Along the way they meet the charismatic Caitlin (Tara Lee), a singer also on her way to Glasgow for a music festival. The plot may sound like the road trip coming-of-age comedies that were popular in the early 2000s, but the performances from the leads give the film an endearing personality and make the road trip from youth to adulthood worth taking.

This film marks Philip John’s move from TV (New Tricks, Downton Abbey, Outlander) to movies. Working from a script by Derek Boyle and Raymond Friel, he brings with him a sharp understanding of mixing comedy and drama. He and cinematographer Alasdair Walker use the Scottish landscapes and cities to give the film an earthy, authentic feel that you won’t find in a studio coming-of-age film. John merges the metaphor of the road movie with the small town to big city coming-of-age blueprint. These young men leave their pasts in Shetland and travel into the world of adulthood. Michael is failing academically and fears that his relationship with Suzy is slipping away and he thinks if he confronts her it will all be okay. Thor and his musical talents are misunderstood in Shetland and Glasgow offers him the chance to further his musical career and find his birth mother.

The mature and mysterious Caitlin acts as their guide as they learn about themselves while travel to Glasgow. From the moment she walks on she screen she takes over the film. Both boys fawn over her and fight for her attention. This dynamic works comedically and for the boys’ arcs. Lee makes Caitlin the most charismatic of the three, but she’s more of a fantasy than a human being, and her significance as a character is to create a conventional conflict between the brothers. The chemistry between her and the boys is enjoyable but their romance is thinly drawn and it’s unfortunate that she doesn’t get the same depth as them. Despite the limitations of her character, Lee is far and away the best part of the movie. I expect to be seeing her pop up in major films over the next few years.

Moon Dogs walks down a recognizable path but it pleasingly tackles the beats of the genre and feels fresh, thanks to its central performances and Scottish locations. Philip Johns’ road trip from youth to adulthood won’t take you on a tour that you’ve not seen before, but it’s the sort of the film that’ll make you interested in following the careers of the actors and talent behind the camera.