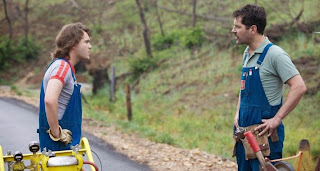 Prince Avalanche is one of those curious films that masquerades itself within the absurd and comedic while considering the profundities of life and how to live it. Director David Gordon Green's screen adaptation of the Icelandic film Either Way, centres around Alvin (Paul Rudd) and Lance (Emile Hirsch) as they spend the summer of 1988 freshly marking out vast swaths of roads in a Texan region devastated by wildfires.


Self-contained, methodical Alvin with practical glasses and trimmed moustache works with Lance, a young man battling the boredom of a tedious job and work colleague. The odd couple pairing are unironically dressed like the Super Mario Brothers while oscillating between familiar bickering and heartfelt understanding. The film is a strong double hander with both Rudd and Hirsch bringing a lightness and likability to their characters.

The pair have sporadic encounters with a moonshine generous older truck driver (Lance LeGault) and a lady (Joyce Payne) Alvin first meets shifting through the ashes of her former home. Prince Avalanche has a story in which nothing and yet everything happens to the main characters. All the obviously dramatic events happen before or beyond where Alvin and Lance are situated. In this way, the ramifications of choosing to be alone as opposed to being lonely are considered in the film.

The 1988 setting allows for a near vintage feel to the film in a time when mobile phones and the internet were not common day things. Like any good long winding conversation, Alvin and Lance share frustrations, intended and unintended humour, kindness and everyone's personal brand of madness. The landscape creates a backdrop in which both men have to confront themselves as they actually are and not how they would prefer to be perceived. With a running time of one hour and 34 minutes, Green has given the film enough time to tell it's story while avoiding a sense of self-indulgent meandering. Perhaps not for everyone but Prince Avalanche is, quite arguably, a quiet gem of a film.

Prince Avalanche. USA 2013. Directed by David Gordon Green. Starring Paul Rudd, Emile Hirsch... Out in the UK on the 18th of October 2013.