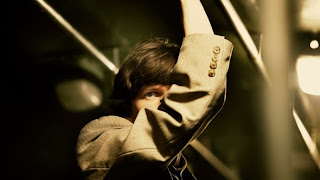 Richard Ayoade is best known for his comedic turn in the tv serie The I.T. crowd (and for his supporting part in the turkey blockbuster of last year The Watch, as the token eccentric foreigner). A few years ago he tackled his first film as a director, Submarine, a bittersweet coming of age story, which is exactly what would be expect a first film to be. But for this second film, The Double, he has taken a radical turn, from a narrative as well as a formal point of view.


The Double is a loose adaptation of the eponymous novel by Dostoevsky, about a timid clerk, Simon (Jesse Eisenberg), stuck in a dead-end job with no acknowledgement for his hard-work, and who gets basically walked over by everybody, that is, when he actually gets noticed. Things take a turn for the worse when a doppleganger turns up (James, also Jesse Eisenberg, obviously!), his exact replica physically but the polar opposite in terms of personality. James is confident, cocky even, gets what he wants, and gets noticed, by the girl Simon has a crush on (Mia Wasikowska), by his boss, by the waitress who bullies Simon... An unlikely alliance forms between the two, with predictably dramatic results.

You cannot blame Richard Ayoade for lacking of ambition, especially formally, a welcome trait in a country that pathetically praises Danny Boyle while despising Peter Greenaway. The adaptation of a Russian classic, here transposed into a very Orwellian/Kafka-esque society in the 80's makes a nice change from the usual gritty social dramas and gangster films.

The director is at his best with the wry and deadpan humour of the film, which should not come as a surprise for anybody who has ever watched him act. From a suicide brigade to a "double" date which its unique take on a similar classic scene in Cyrano de Bergerac, alongside some fantastic cameos (which I won't spoil), the film is surprisingly funny in spite of its rather dark subject.


But does he deliver on the dramatic front? The whole dystopian society has been done before, and better. As nice as the production design is, you cannot help thinking that Brazil achieved a lot more thirty years ago. It might seem an unfair comparison with their wildly different budget, and less funds should not mean less imagination. At least it manages to convey some of the alienation of the character quite well however, and the drab existence he is stuck in.

But while you do sympathise with the character's plight, the whole film is surprisingly uninvolving, despite its illustrious source material, and feels rather like an empty style exercise, which is never boring but only mildly convinces. If anything the balance between comedy and drama is probably what lets is down, as too much of the former takes some depth away from the latter. Film festivals have a knack for cruelly sorting the memorable films from the rest when you see so many of them within a limited time, and I have pretty much forgotten much of it, when so many others seen at the LFF are still haunting me.

Mia Kasikowska has little to do apart from being pretty and unattainable in a mousy kind of way, and Jesse Eisenberg delivers a rather inspired performance as the two opposite doubles (or the two sides of one character, depending on you read the story!), but if anything it is a little obvious, as each of them represent a one-dimensional entity, with little subtlety to either of them. An intriguing if not very successful experiment, the least you can say about its director is that he tried something different, and I wish more British directors would follow suit.