LFF 2013 Capsules: The Epic Of Everest 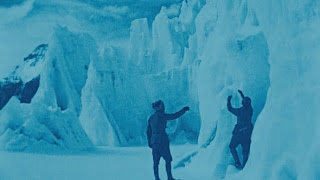 The British Film Institute's role is not just to promote contemporary cinema and develop and support homegrown talent, it also has an important task of conservation and restoration of British cinema. And as has become a tradition every year at the London Film Festival, an old film from their archives was given the Archive Gala treatment, this time, The Epic Of Everest (1924) by Captain John Noel.

While the atmosphere at the LFF a decade ago used to be rather sedate and stuffy, filled with OAPs, it has become a lot more vibrant, with a wider and more diverse audience over the last few years. But the Gala screening of The Epic Of Everest, which I attended, was a different affair, with an amusingly old world, very posh and ancient audience. Indeed I must have been the youngest member of the audience by about 100 years, bar two young toffs sat next to me, who I fully expected to be secret members of the Bullingdon club about to unleash mayhem in the cinema.


In keeping with the grandness of the occasion, the introduction was hosted not by Festival Director Clare Stewart but by Amanda Nevill, the Chief Executive of the BFI. The daughter of director Captain John Noel, Sandra Noel, who herself assisted with the restoration work, came on stage to testify of her father's achievement and passion. And we were treated to a fascinating account of the painstaking restoration process, which intriguingly involved deciding which stains and scratches to leave or remove, to retain some of the film's authenticity. At some stage however, I did wonder if the introduction would last longer than the actual film.

Now, I must admit, I have a complicated relationship with documentaries. While I do admire quite a lot of them, I still can't always bring myself to treat them as proper films, as, for most, they tend lack the artistic vision behind fiction films. And the issue is even more apparent with nature documentaries which, as informative and interesting as they might be, tend to be a tad too earnest and straight-forward. There are recent and notable exceptions obviously, when a director has a real skill and vision, such as the recent Encounters At The End Of The World by Werner Herzog. 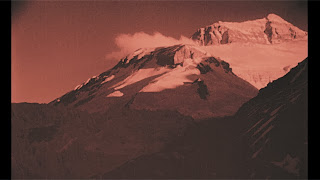 The Epic Of Everest follows the third attempt to climb the Everest, and the first recorded on film, with the help of a specially designed camera. The first act of the film follows the men as they prepare for their ascent, setting camp in the highest villages of the mountain, mingling with locals who have never been exposed to Westerners before. There is a fascinating account of the life of these local Tibetans, although the patronising, old colonial world tone used in the intertitles might make you wince (we learn that they never have a wash in their life).

But as the film moves on to the expedition properly, this is when it comes into its own. The images and landscapes are absolutely fascinating, still now to a modern audience which is more accustomed to this kind of documentaries, and I cannot imagine the effect those had at the original screenings in the 20's (the film was a tremendous success at the time and the director went on a world tour with it.) The sparse use of coloured tinges add to their oddity and otherwordliness of the footage. And the bold decision to commision a very unexpected new score was a stroke of genius. Rather than adding some pompous classical music, composer Simon Fisher Turner offers a combination of electronic and natural noises which proves to be a wonderfully evocative and a suitably eerie accompaniment.

The experience of watching this on a big screen is truly hypnotic, and at times feels more like science-fiction than documentary, like an experimental adaptation of Lovecraft's At The Mountains Of Madness scored by Sigur Rós, with shots of icy wilderness in tinges of blue and red evoking worlds outside our own.

While a voiceover in a regular documentary might have proven distracting, here given the nature of the film, its lack of dialogues adds to the feeling of quiet contemplation and isolation. For all our technological progress, the ascent of the Everest is still a treacherous affair which claims lives every year, and the film is also a testament to the incredible courage and the spirit of adventure of those early pioneers. There is pervading sense of danger and menace throughout, with nature presented in all of its immensity and might against an insignificant humanity (interestingly, this is a theme shared by two new films shown at the London Film Festival: Gravity and All Is Lost). And indeed, two of the climbers sadly lost their lives in the expedition.

An absorbing and humbling experience, The Epic Of Everest is a real filmic treat in its own right due to some bold artistic choices. The film is showing at the BFI through the next month and is available on the new BFI VOD Player. It will be released in dual formats in January.