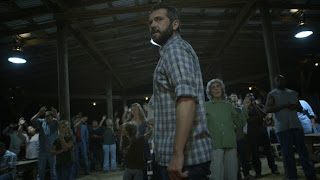 Ti West is one of those emerging talents from the new wave of independent horror cinema, but some of his output has been a little hit and miss of late. His films are always very distinctive, and slow burning, which is such a relief in a time of derivative horrors and epileptic editing. And House Of The Devil was a wonderful and pretty much perfect tribute to 80's horrors. But other times he has missed the mark. The Inkeepers suffered from uninteresting leads and an unengaging story. His segment in V/H/S jarred with the others but offered an interesting pay-off. And his ABCs Of Death one was needlessly offensive. Now he is back with The Sacrament, which played in the Cult section of the festival.

Ti West was on stage at the LFF screening to introduce his film last night, and he warned us that the film was somehow a departure for him, a horror film still but with a difference. In The Sacrament, Patrick (Kentucker Audley), a journalist from Vice, learns that his sister (Amy Seimetz), a reformed drug-addict, has joined a remote, religious community. When she invites him to visit her, he takes along two colleagues, Jake (Joe Swanberg) and Sam (AJ Bowen) to make a exposé of what sounds more like a cult. Once there, appearances of a self-sufficient and happy community are soon dispelled when its more sinister nature emerges.

As with his previous films, Ti West takes the time to set up his story, as we are introduced to a happy-clappy, seemingly idyllic retreat, with its underlying creepiness, especially with the arrival of their leader, "affectionately" called Father. As you expect, it all goes wrong, terribly wrong, this is not a spoiler to say so. But what sets the film apart from so many other similar themed films or many horrors in general, is how realistic the whole thing feels, which makes it all the more disturbing. And while the director grabs our interest right from the start, despite the slower pace, when the going gets though, he unleashes some pretty horrifying scenes, in a shock-filled third act that never lets go.

Do not expect heavy gore or cheap jump scares. Instead he carries on with the realistic vibe, which sets the film apart from so many other horrors. It makes it tricky to qualify the film. It truly is a horror film but one where any of the events could easily happens in real life. And there is a pervasive air of melancholy and sadness, when the director takes the time to present the members of the community and the reasons that brought them there, their broken lives, their hopes...

For once, the found footage format is completely justified, even when it all goes wrong, as the characters are supposed to be journalists documenting their escapade, which explains why they carry on filming instead of just running and screaming.

The cast is uniformly excellent, with so many familiar faces from the indie horror scene (Joe Swanberg, AJ Bowen, Amy Seimetz...) that it is almost becoming incestuous (not that I am complaining!). And in the part of the leader, Gene Jones delivers a truly terrific performance, far from the usual over the top antics that such a character might have warranted in another film, smarmy and menacing but with much nuances. He was present at the screening too and proved a much amusing presence