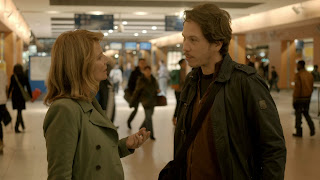 The excitement is rising as the London Film Festival is nearly upon us! While I will be doing some proper, daily coverage of my days at the festival once it officially starts on the 10th of October, I shall also write a few capsule reviews of the few films I will be seeing beforehand at press screenings, in case you are still undecided on some titles! As much as I'd love to, I won't have time to write full reviews of all of them, so I am offering you those LFF capsules instead. First stop, Gare Du Nord.


Gare Du Nord, directed by Claire Simon, is a work of fiction set in, well Gare Du Nord in Paris, with echoes of a documentary as one of its characters is, conveniently, a student in sociology, which allows for some short interviews and interaction with real people who work at the station, talking about their lives and what brought them to end up there. An approach which makes sense since Claire Simon has split her career between fiction and documentaries.

We follow several, loosely intertwined narrative threads, although only one of them is fully fleshed out: in it, a retired teacher (Nicole Garcia) embarks on a completely unexpected romance with a student who is conducting surveys at the station, having bumped into him randomly. Nicole Garcia shines in this and there is much subtlety and sensitivity in the way their story is handled.

I was a bit dubious about the subject as Gare Du Nord has got to be one of the gloomiest, most depressing places on Earth (only beaten to the top spot by Euston station in London). And while I can appreciate what the French director tried to do, I still cannot see much point to it. She sets herself the task to present the train station as both a a snapshot of the very different types of commuters who rushes through the station daily, as well as a magnifying glass for the frankly not terribly encouraging social and economic situation France finds itself in at the moment, with endemic unemployment and poverty. But it is not exactly ground-breaking or particularly enticing.

The film struggles to maintain the interest for its unnecessary long running time, and there is a frankly baffling foray into fantasy that sits uncomfortably with the ultra-realistic tone of the rest. As for the train station itself, it looks just as dull in here as it is in real life. I usually like my films gloomy and depressing, when they are arty, black & white, stylised... Here it is just as appetising as a lukewarm ham sandwich bought at the station on a Sunday afternoon.