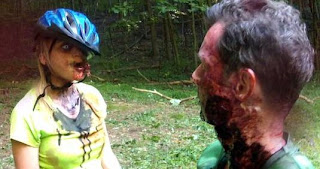 Ah, FrightFest! My guilty pleasure among the film festival circuit. More than any other films, horrors demand to be watched in a huge, packed screen, with an audience who laughs and screams at all the right parts. And the audience at FF is probably the best in the world, the most fun, and also the nicest there is, respectful of any cast & crew which comes up on stage, and happy to put it with some truly atrocious films, as long as there is a fun decapitation involved. Last year brought us the unforgettable Tulpa, and the Chinese banquet incident I wrote a poem about. While this year did not have such memorable moments, or any films as exceptional as two I saw in 2011 (The Woman) and 2012 (Berberian Sound Studio), the general quality was higher. It was to be a year to remember for a sad reason, in an end of an era kind of way, but more on that later.


Such is the plight of the casual film blogger that I am only writing about FrightFest while some have already published their wishlists for FrightFest 2014. But writing in hindsight is rather positive, as watching films in such a quick succession temporarily scrambles your judgement.

FrightFest started on the Friday evening for me, with Haunter and V/H/S 2. Haunter is a frustrating affair, a film that I admired for its ambitions but cannot say I enjoyed all that much. Its director, Vincenzo Natali, has had an interesting if uneven career so far, after his low-budget/high concept debut, Cube. His follow-up, sci-fi noir Cypher, sadly did not have the budget to match his ambition. Later on, he ventured on some Cronenbergian territories with Splice, a flawed film which collapsed spectacularly on its third act.

And now he is back, with what seems to be his trademark: a high concept. Haunter could be described as a horror Groundhog Day by way of Jean-Paul Sartre, in which Lisa (Abigail Breslin), the ghost of a teenager, seems condemned to relive the same day over and over, trapped in her house with her family, whose other members are blissfully unaware of their curse. But as the same day comes back again and again, Lisa manages to make a connection with the world of the living, and while threatened by a mysterious shadowy figure, she realises that she can help another girl avoiding her fate. 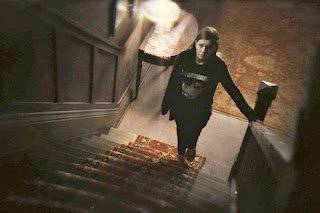 On top of its high concept, Haunter is fantastically atmospheric, and intriguing. But somehow the sums of its parts do not add up, and despite a handful of creepy scenes, the most frightening thing about it is how Abigail Breslin how grown up since Little Miss Sunshine. And while watching this, I kept being reminded of Under The Bed, which I saw last year, with which this has some similarities, and which managed to be a lot scarier. And once the real stake of the story is laid out, all the way until its resolution, for all its effort and imaginativeness, it feels strangely hollow and unsatisfying. And after so many films, I do begin to wonder if Vincezo Natali will ever deliver what his early career promised.

And then came V/H/S 2. I had greatly enjoyed the first one, a porte-manteau of horror stories that was thrilling and fun. This time we were offered the treat before the screening. Gareth Evans, director of one of the segments and of course, of The Raid, came on stage with a little surprise for us; some unseen footage of The Raid 2. The best news about this is the little tidbit he gave us about the story. It will not be The Raid, only bigger, it is a completely different story, which takes place over the course of several year. And the footage he had for us was exhilarating. I only need to say this: Hammer Girl. In the scene, a girl carrying two hammers despatches a whole wagon of baddies in the most gruesome way. (Haven't we all dreamed of this on a crowded Monday morning commute?). Gareth Evans seems like a really cool guy by the way, totally low key despite the growing buzz around him.

SoV/H/S 2. There seems to be a trend for these porte-manteau horrors, which were once so popular (Creepshow etc..) with this franchise and The ABCs Of Death earlier this year, itself getting a sequel. And I enjoyed V/H/S 2 tremendously, a film which truly needs to be seen at the cinema in the company of a full audience. Here the wraparound story is tighter and shorter, and also makes more sense. My minor complaint with this new film is that it feels almost too short. Out of the 4 stories, 3 feel a little underdeveloped. It is always harder to achieve this on a short running time but the first film did manage it better somehow. Take the last segment: Slumber Party Alien Abduction, by Jason Eisener (Hobo With A Shotgun). This is just what it is: a teenage slumber party is invaded by aliens. It's fast-paced, it's funny, it's scary and intense but that is all that happens, and it is over far too quick. 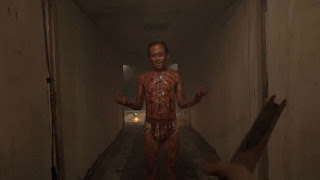 The first segment is fun but a bit obvious and the weakest: a man gets an experimental eye implant, and sees ghosts. At least it does something different with the found footage brief as the whole action is seen through his artificial eye. But still, it is all the most disappointed as it was directed by Adam Wingard, who gave us the fantastic A Horrible Way To Die and You're Next! The second segment is another piece of trashy fun, following a zombie outbreak spreading in a park, with all sort of gory and hilarious mayhem.

The best segment and by far however, is the third one, by Gareth Evans & Timo Tjahjanto. It follows a group of journalist in Indonesia, as they investigate the retreat of a cult. I do not want to reveal too much but it all goes horribly wrong, with all kind of evil shenanigans taking place. While the plot might not sound all that terribly original, it impresses with its carefully built up crescendo of terror, as the story gets more and more mental and terrifying! And Gareth Evans, who has already proven with The Raid that he can do action, and well, here shows that he has some equally impressive talents when it comes to horror. Shocking scenes after striking images, it is a case study on how to scare its audience and keep the pace going.

And that was it for the first day. On the following day, I saw two brilliant films and two terrible films, including one which gave me the best uninterrupted nap I have had in ages!