Phonegate: Why Turning Off Your Smartphone Benefits Everybody 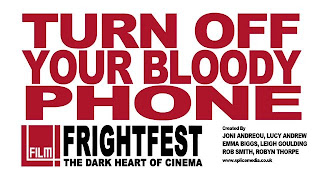 I love Film4 FrightFest. Horror audiences care about movies a lot. So much so, if anybody dares to use their smartphone during a screening, they’re likely to be shouted at and harangued until said person is shamed into either leaving the auditorium or being a good cinema-goer and switching off the phone. Seriously, the zero tolerance policy is brilliant and Alex Billington would love it.

One year, I heard somebody bellow out across the cavernous Screen 1 of Empire Theatre, “Turn your phone off, you fucking c*&t!” FrightFest run slightly less abrasive (but often gory) adverts before each screening at the festival. The ‘Turn Your Bloody Phones Off’ idents are most amusing. If you haven’t got the message then there’s grouchy Scottish FrightFest co-director, Ian Rattray, to threaten you into compliance. The organisers have cultivated a policy regarding mobile phone use that totally works.


Indeed the modern technological wonder that is the smartphone is both cause for celebration and consternation. Who needs good old crack when you’ve now got a perfectly legal Crackberry to mainline into? But there’s an ugly trend occurring which sees enjoyment of cinema being hampered by individuals (or groups) who like to not only keep their phones on during a movie, they’re probably tweeting, on Facebook or engaged in a text message conversation.

Very recently, film critics such as Mark Kermode and Nigel Floyd took to Twitter (after a screening, of course) to complain that a majority of the audience at a screening of The Conjuring (it was a mixture of press and general public) were very badly behaved, either talking or checking their phones. Not cool. But never mind the press, for a minute. Those who have a) paid good money to watch a film and b) love cinema and want to engage with a chosen title with as little disturbance as possible, some douchebag in row C engaging not with the moving images but the tiny screen of his phone is going to cause a problem. A big problem!

American blogger and film reviewer Alex Billington of First Showing caused a stir at Toronto International Film Festival when he ‘lost his sh*t’, to use the modern idiom, and dialled 911 to report what he thought was some dude recording a movie using a smartphone … during an industry/press screening. If this sort of nonsense is going down in industry/press screenings, what dreadful road are we on … what tragic course have we set ourselves? I’m in a sort of Voltairean bind with this incident. You know, that famous quote attributed to Voltaire, but he didn’t actually say or write it: “I do not agree with what you have to say, but I'll defend to the death your right to say it.”

I think Alex Billington is absolutely right to call bullsh*t on this horrid modern development and even go so far as to embarrass or confront the individual … but dialling 911 and expecting the 5-O to rock up and take the perp downtown to answer for his crimes is a bit over the top. Rumour has it the dispatcher on the other end of the line laughed at him … then they probably should have warned him he can be arrested for wasting the police’s time. Alex felt he had to “call it in”. Yes, indeed, but inform the management and not Johnny Law.

Firstly, even if there was an individual suspected of recording a movie illegally (which is REALLY f*&ked up if said person enjoying TIFF on an industry or press pass), dialling a number reserved for the emergency services is a massive waste of time, resources and breath. It also makes the caller look a bit demented and intolerant. A bit like using a hammer to crack open an egg. After all, even if the person is suspected of illegally recording a film they’re innocent in the eyes of the law until proven otherwise. We can’t just accept Alex’s word for it.

Once an APB was put out on Twitter (sorry for that lame gag), Alex was either praised or ridiculed for his tough, zero-tolerance stance. He tweeted this (paraquote): “I'm just trying to fight the good fight, even if it others don't agree with my methods.” There is no method in this madness. He also tweeted his reason as this: “Piracy is dangerous, that's what I was most concerned about. So called it in.” But how could he prove the person was pirating the film? How is it dangerous … I mean with a sort of immediate effect that he felt the need to call the police? There are several legal considerations Alex either didn’t know or care about. He was caught up in the moment, the adrenaline and anger clouding his judgement. What was the conclusion of those around him? If he wants to be celebrated as fighting the good fight, then he needed to act with a bit more decorum and common sense. 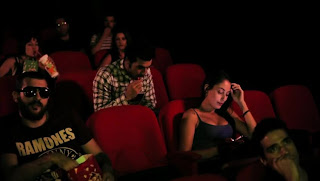 Unfortunately, the TIFF management didn’t seem to help Alex in his one man struggle to rid the world of d-bags in screening rooms. TIFF management blew him off (no, not like that) and basically shrugged as if to say, ‘No biggie, dude’. He tweeted this: “Just told by TIFF that industry have the RIGHT to blatantly use phones in the film. They will 'take my complaints' but nothing can be done.” The argument has switched and now seemed to be about ‘BLATANT’ phone use. Again, we have to ask for a counter argument or stance from TIFF before we accept Alex’s version of events. Given they have – like most festivals – messages on the screen kindly asking people to switch off their phones,   the ‘right’ to ‘blatantly’ use their phones doesn’t wash.

But short of asking the person to leave or hiring security guards (I recommend the Cannes guards in their nice beige suits because they are genuinely a bunch of horrible c%@ts that take no sh*t from anybody. They wouldn’t even let Oscar Issac back into the world premiere of his own movie – Inside Llewyn Davis – after he nipped out to take a leak) what can exactly be done? The TIFF organisers should – like FrightFest – foster a zero tolerance ‘turn off your bloody phones’ policy and make it fun with idents and general audience abuse aimed at those who dare to countermand the general consensus. That is the best way to do it.

You can tell from the tweets this is one irate motherf&*ker we’re dealing with and that, like Peter Finch in Network, he’s as mad as hell and not going to take it anymore! Alex tweeted to Ti West, the director of The Sacrament, whose film the blogger was trying to see: “Hi @Ti_West I'm trying to watch your film but guy in front row keeps using phone and theater tells me he is allowed. Ruining the experience.” I also assume Alex was tweeting these messages whilst outside the screening room and not inside? Otherwise he’d be a massive hypocrite. But it clearly does argue about the effect of ‘ruining the experience’.

That’s the part where I can get on board, share a brewski with Alex and say, ‘Totes agree, homie’. You don’t need to be Sherlock Holmes to denote from this tweet that Alex was angered by phone usage … but there’s no mention of pirating … which given that this was the issue why isn’t it mentioned expressly to the filmmaker? Like, “Yo @Ti_West, I saw some d-bag pirating your movie in an INDUSTRY screening. Sh*t’s f&*ked up y’all.’ I’ve got a sneaking suspicion that this ‘pirating’ detail has been made up in hindsight and to make Alex’s reaction somehow resemble not a guy having a sh*t fit but a crusader against piracy and some Dudley-mother-f&*king-Do-Right. Scratch that. It’s a bit like an informant from some Soviet bloc era Secret Police initiative. Hysterical? Hardly. But Alex is totally right to call up the madness of allowing smartphones and other gadgets, one presumes, to be turned on and used during press shows.

It’s a bloody brilliant job reviewing movies for a living. But it is a job, and people have to work. Some twat playing around on their phone – recording the film or not – is a distraction and an unwelcome one. For me, Alex has got his heart in the right place for kicking up a fuss … but resorting to calling law enforcement is crackers and not on at all. Film fans have to put up with a litany of cr@p when deciding that a night out at the movies is a swell pastime. They have done so ever since the medium first began touting for business in the fleapits and circus tents.

Sometimes entire audiences were burnt alive due to the explosive nature of the nitrate contained in film prints. Never mind the explosive nature of an audience member. Movie goers have to deal with audiences being noisy, people scoffing their faces with over-priced junk food, and given recent reports from last year and this year – some individuals like to compliment the screen experience by j*&king off. The act of going to the pictures makes for a strange social contract, at once collective and private. As Sartre once said, “Hell, that’s other people.” In the olden days (right up to the early 1980s), too, smoking cigarettes was considered de rigeur. But people can be told to shut up, to stop scoffing their faces so loudly, to put it back in their pants.

The relatively new phenomenon of smartphones and our inability to detach ourselves from them is a cause for concern on a wider scale than just their effect on the movie going experience, which is getting more expensive and with added hassle when confronted with idiots. Now Alex didn’t pay for his movie ticket. He seemed a bit affronted when TIFF told him to go see The Sacrament at a public screening, too. He did probably pay the admin fee for his press badge (or his outlet paid), but he’s still having his absolute right to engage with a movie f&@ked with – and that’s not cool at all.

But we have to understand as a society that there are levels of crimes in this world and copyright infringement ain’t gonna cause the cops to drop their donuts, leg it to their cars, slide over the bonnet like TJ Hooker all cool and sh%t, stick the siren on and raze it to the picture house to deal with somebody with a press badge who is being a bit of an a-hole. If this all sounds super snarky, forgive me, but it’s to serve the greater – and valid – point. If TIFF staff are not enforcing their own policy: then they bloody well should. Take a leaf out of FrightFest’s book because what they’ve done works for everybody. Whether critic or fan, we are there in the screening room to engage fully with the art form we love. Somebody f&*king with our sh*t ain’t cool. But neither is calling the fuzz. It’s a d*ck move.
at 21:28