Harrigan - Policing the Hard Way in the 70's

Sharp and brutal, Harrigan is a crime thriller set in 1974, in Newcastle. Like a strong punch to your gut, this film will hold you captive and take you back on a journey to Thatcher's destitute 70's. Against the bleak working class area of a dark November, we see the return of  detective sergeant Harrigan (Stephen Tompkinson) who has been working in Hong Kong for many years.

He returns to his home town, only to find it knee deep in economic crisis, and power cuts. Having his younger former junior (Mark Stobbart) as his new boss, doesn't bode well and the two men clash on their views of policing in the area. Tompkinson is excellent as the man of few words, with an inner strength and a troubled past. Harrigan decides to take on the local gang who hold the community in fear, and in doing so gain revenge for the murder of his daughter. As far as scumbag crooks go, they couldn't of cast anyone better than Ronnie Fox (go to guy for Cockney thug) and Craig Conway. Gillian Kearney is Bridie, an ally of Harrigan's at the station and love interest, although trapped in her own problematic marriage. There is an intense realness to this film, as the 70's setting is so authentic, especially the police station. I particularly like the curtains below - 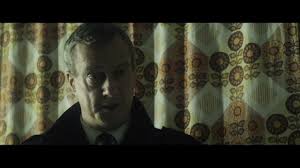 This is first feature film for director Vince Woods (he is credited as producer as well). He was influenced by classic westerns, and there is the feel of the 'Sheriff' taking on the bad guys. Identifying himself as bit of a 'loner' who moved around a lot as a child, he captures this in the character of Harrigan. There is a film Noire element with Woods, citing Blade Runner as an influence, in which almost all the daytime scenes are interiors, and the night scenes are dark and sinister. The authenticity of the film, comes from the script by writer Arthur McKenzie, an ex policeman from Newcastle upon Tyne. In a way this is almost semi autobiographical, as he served for 31 years as Detective Inspector in charge of the toughest division of Newcastle's West End. McKenzie has written for 'The Bill', and other detective series such as 'Wycliffe' and 'Spender'.