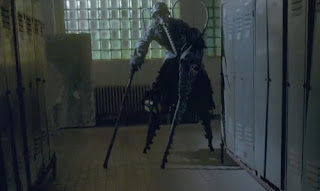 After the appetiser of day 1 with only two films, came the piece de resistance, a day of 4 films back to back. This is what I love about FrightFest, the way the screenings are concentrated in one place, making it much easier to watch them back to back, as well as enhancing the social factor greatly. There is nothing I enjoy more than coming out after each screening to discuss the film we have just seen with my fellow festival-goers. On this full day, there were no half-measures. Out of the four films I saw, two were brilliant, and two were rubbish.


The day started with Frankenstein's Army, which came preceded with a favourable buzz. It follows a platoon of communist soldiers after WW2 as they encounter a mad nazi scientist (is there any other kind?) conducting his nefarious experiments.

I have to admit, the first few minutes had me worried, as I thought it was going to be as derivative and dull as that other zombie SSploitation I saw last year at FrightFest, Outposts 2. But my fears were quickly quashed like a ripe human brain, as this turned out to be one of the most demented and gleefully inventive horror films I have seen in a while. Besides, this was more Redsploitation meets SSploitation as communists and nazis were pitted against each other.

While done on a low budget, the nightmarish creatures in this film (designed by the director himself) are a pure joy, and you just cannot wait to discover each new one being unleashed, looking like magma of flesh of metal, one more unlikely and insane than the other. Sure the story feels like a magma of flesh and metal itself but so what, it's steampunk cinema at its best, with some delightfully disgusting gore to top it up (the mash-up of Communist and Nazi "ideology" scene had me wince and look away, you'll see...). The film is being released on dvd this month and deserves to become a minor classic. 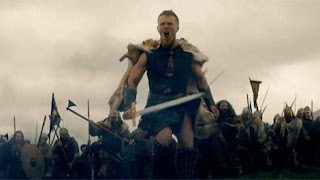 And then came Hammer Of The Gods. I always feel bad being negative with films with a lower budget, as I almost feel no right, not even being a fully-fledged critic, to unleash my bile in a few lines about the labour of love that a whole team who spent months, even years on. But unfortunately, I cannot even say a positive word about it. I actually cannot quite understand what this was doing in FrightFest, being an action film with only a slight touch of fantasy, an issue that was actually addressed when the film was presented on stage. If it was OTT in an old school heroic-fantasy kind of way, I could have understood, but no such thing.

For what I made out, the story follows a bunch of viking soldiers walking through some beautiful landscapes, bumping into a paedo-bear who makes a few abhorrent (sorry, read, hilarious if you're a lad) comments, before squaring up with some brutal cave-dwellers. But really it felt like spending a saturday night with a bunch of testosterone heavy lads pulling their big manly voices to impress each other. It felt like when I used to take a train onto Liverpool Street on a saturday night with the upcoming passengers from Essex, with only slightly less blood involved. I called this Valhalla Boring at the time. At least it gave me a blissful and uninterrupted nap for a good hour during its middle part.

And the highs and lows continued. After the very low, the very high and came No One Lives. This sort of film makes the life of a critic difficult as you do not want to discuss the plot into too much details, which is hard if you want to express its brilliance. In it we are first introduced a bunch of violent thugs after a burglary went wrong and ended up in a slaughter. Driving away from it, they meet a seemingly ordinary couple at roadside restaurant which they promptly proceed to kidnap. But nothing is what it seems and soon the tables are turned. Do you think I'm spoiling it? There is a lot more to it! 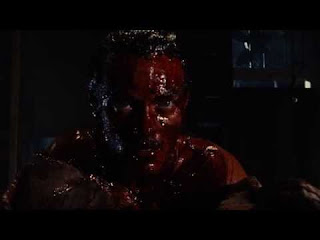 In retrospect, I shouldn't have been surprised, as the film is directed by Ryuhei Kitamura, who helmed the underrated The Midnight Meat Train a decade ago. US indie horror is proving deliciously inventive these days and this is another fine example. The plot might seem familiar, but the film proceeds with its very unique style, a mixture of OTT gore (with one particular scene which has to be seen to be believed, and had the whole audience applauding), dark humour, savagery, yet among all this, something resembling romance, a pretty messed-up romance for fear of a stronger word, which gives its dark heart to the film, among all the slaughtering and human meat grinding.

Among all this, Luke Evans, who I found so dull in Fast & Furious 6, shines with a character that is part Terminator, part Rambo, part dark angel, and displays much charismatic presence which I never knew the actor had in him. Do not watch the trailer by the way, it manages to be both misleading and spoilerific. The film is only getting a dvd release in the UK which is a real shame but does not surprise me, given its oddity and ultra-violence. 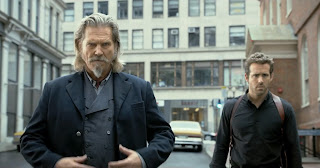 And then came the atrocious turd of the day, R.I.P.D. The only thing that can rest in peace after this is Ryan Reynolds' career. On paper, this might have looked like a winner: Men In Black with zombies meets Ghost. But this was boring, uninspiring, with some terribly ugly CGI which looked like a 90's revival, made even uglier by the totally unnecessary 3D post conversion which only serves to darken the screen. Ryan Reynolds is so transparent in this I barely remember him, Jeff Bridges chews the scenery but not as much as his words, with a barely understandable Far West accent (he is a dead sheriff from the good old West you see) and Kevin Bacon's turn is only marginally less embarrassing than those EE adverts he has been assaulting British audiences with. It had a couple of amusing moments, and at time almost felt like a throwback to some 80's fantasy comedies. But mostly, it was a tedious bore.

A day of highs and lows which ended up like an unofficial sequel to last year's FrightFest where I met Human Centipede's director Tom Six. This year, I peed next to Human Centipede 2's lead, Laurence R Harvey. I was to shy to speak to him this time however. Plus it hardly felt like the right place.