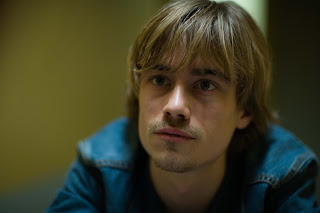 Most of the British audience will have only recently discovered Matila Malliarakis in the French serie The Returned. But in Beyond The Walls, out in the UK on dvd, he shows a different side of him, and in an exclusive interview with FilmLand Empire, he has come up with some very thoughtful answers about the film making process, LGB cinema and French tv series.

1) Your characters in Beyond The Walls and your relationship in it feel incredibly real. Did you have any input in the script?

Most of it was already written into the screenplay, but David had a very clear idea of the characters, and is one of those directors who knows how to let the actors invent in the moment. Once we all agreed on the heart of the film, he trusted us enough to let us propose things, even if they didn’t initially correspond to the storyline.

2) How did the casting work? Were you cast separately, or did the director ask you to do some test scenes together, to see if there was some chemistry between you two?

David met both of us separately the same day, and for the same part. At the end of that day, he’d decided he wanted both of us in the film. He had a think about it, and then he re-wrote the character of of Ilir (at the time, the character’s name was Désiré) for Guillaume. Then the three of us read the screenplay together to see how we might work together.

3) What is the situation at the moment when it comes to actors accepting to play a gay character? Has it become completely stigma-free, or do you think some actors might still be reluctant to play them? The recent events with the "Manif pour tous" demonstrations show that homophobia has not completely disappeared in France.

As an actor, I have absolutely no problem with it. Some might worry about being typecast, but personally I don’t and it doesn’t affect my acting. All that interests me when I'm offered a role is the way that I will tell the story and with whom I will be working with. And in any case, the issues confronting my character, David, are not gay issues.

In my opinion, the film is about the problem of the beginning of a relationship; in other words, the joint project of forming a couple. About desire and its contradictions. About disappearance, and absence, and authority. About the prison environment and how, if we give in to its power, it can install a barrier of misunderstanding and domination. It’s a film which makes you embrace life to the last drop, in my opinion!

Yes, homophobia hasn’t gone away in France, nor elsewhere. People are still afraid of  sexual, and cultural differences. But humans can change, I really believe that. They can overcome their fears, if they really want to. I know someone who has a phobia of melon seeds, and so she cannot even enjoy a delicious honeydew melon. She’s working on overcoming this seemingly irrational fear. Well, I think social phobias can be cured, too. There are people who can help and listen.

4) Outside the ghetto of a certain kind of gay cinema which only targets a specific audience, they are still very few more mainstream films which depict a gay relationship as the main story (with some notable exceptions such as your film or La Vie d'Adèle). Why do you think that is?

To be honest, I have no idea. There are obviously problems of production and distribution, that’s for sure. And sometimes, there are, as you say, ghetto-films which don’t let the ‘non-initiated’ in, and so restrict the visibility of a film. Producing a film is hard enough as it is, without adding extra barriers. But I think that ‘where there’s a will, there’s a way.’ And in fact, fairly recently, there have been some magnificent films which have portrayed gay relationships - even if they haven’t been central - such as Lucy Mulloy’s Una noche, Céline Sciamma’s The Water Lilies, Andrew Haigh’s Week-end, Tom Ford’s A single man, Gus Van Sant’s Harvey Milk, Xavier Dolan’s Les amours imaginaires, Rodrigo Garcia’s Albert Nobbs, which are just a few that I’ve seen that spring to mind.

And there are other, older films which have moved me, such as Cyril Collard’s Les nuits fauves, Patty Jenkins’ Monster, Claude Miller’s The best way to walk, Mike Nichols TV adaptation of Angels in America, Schlesinger’s Midnight Cowboy, Lumet’s Dog Day afternoon, Visconti’s Death in Venice... For me, it’s not a question of quantity, but quality, as in the film-world in general. As regards distribution, in France, there’s a bit of a logjam.

5) You were both in The Returned, which has recently aired on British TV, and has become a much talked about sleeper hit here. Were you surprised by its success?

You can never predict what will work or not. So, yes, it’s always a surprise. It’s a lovely reward for all those who worked on this series.

6) For all of its reputation when it comes to cinema, France seems to have struggled for years to come up with some quality tv series to rival those of HBO or the BBC. Yet it seems to be catching up with Engrenages and The Returned. Do you think it was a just a fluke or there is a real willingness to produce some quality tv series in France nowadays?

I think that the same thing is happening to French TV as happened to cinema in the 1960’s; viewers want something new. The vast majority of them don’t want something on TV they can just fall asleep to.

Art can be just like a pill, a placebo, which helps us forget our worries for a while! But it  can also ask questions and call upon our humanity. Art appeals to our bodies and souls. It has a social and civic function. In fact, it can play many roles, it’s up to us to choose.

We must make sure that French television doesn’t only broadcast commercial propaganda, formulaic soap-operas, and the artful and wonderful English-speaking series! TV is above all one of the most important media, along with radio, and behind internet. But even more important is language, and yet people have stopped talking to each other, conversation is out of fashion, and language has become impoverished.

We really have to be careful about what we give and what we receive.Why do we overdose on TV? When we eat something that’s good for us, we don’t need to eat it in great quantities, but with TV, we seem to overeat and get indigestion. It’s the same with most of the world’s big problems; economic and social inequalities, environmental, ecological, climate issues...We can choose to do the right thing.

Returning to the original question, ‘Engrenages’ and ‘The Returned’ have been successful, not simply by chance, but because there’s been a strong desire for them to work from all sides: the TV channels, the producers, the scriptwriters, the directors, technicians, actors, and of course the TV viewers. Watch out for more!


I have published a review of Beyond The Walls here, and watch this space for an interview with the film's other lead, Guillaume Gouix
at 20:53