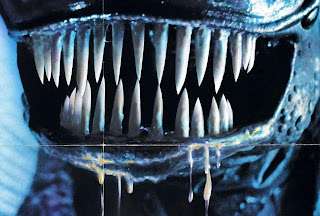 When Forbidden World started, I actually thought something was wrong with the dvd. It looked like the editor had pressed on all the buttons in front of him while half-drunk, resulting in some spliced footage of battle in space as well as short clips fast-forwarded from later on in the film, all of it which made no sense whatsoever. A few minutes later, after a space marshall escapes said space battle by going through "hyperspace" (read: the director placed the camera inside a lit Pringles tub while blowing some light air over the actor's hair to simulate the gigaspeed), he arrives on a scientific base in a distant planet, where some scientists have been playing God and splicing up various species's DNA to create new ones. Obviously it all goes wrong. Plus the female crew seems to have a weird allergy to clothing.

This could easily be filed into the so bad it's good file. Except that this does not belong there. It belongs in the genuine WTF file, and Forbidden World has instantly become a minor cult classic for me. This is a true B-movie, not in the modern way in which these have now become $200M+ bloated blockbusters. Instead, it belongs to a by-gone area where such films were made by recycling sets, or even in some case existing footage from previous films, with micro-budgets, pimping them up with the allure of cheap violence and cheap display of flesh. 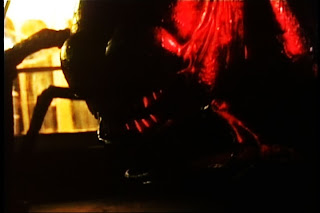 If you have read my blog for quite some time, you will know how much appeal 80's electronic music and neon lights have for me. And in that respect, this film is an absolute gem, with a truly inspired and low-key electro score, which sounds like something that would play in the chill-out lounge of Studio 54 if the legendary night club was in a space station. And the patina of time has worked overtime, with the film offering an almost poetic and psychedelic like display of random bright colour and sounds.

There is so much unabashed misogyny in here, it makes you wonder if, with hyperspace comes hypermisogyny. The two actresses spend their time either completely naked or wearing skimpy outfits. One of them, June Chadwick (from the TV serie V), is so wax-figure like in her acting, she appears to have invented botox before its time. Every male actor is a peeping tom peering at them either directly or through monitor screens (including the monster, who goes one step further with a tentacle-based explosive rape), and the whole thing feels so sleazy, it's like an 80's New-York back alley in space. So much so that I actually felt sticky just watching it.

At some stage, the two ladies devise a plan to thwart the monster while naked in the shower and lathering up each other, as you do. Later, the monster is seen lying on top of a computer for some reason, chilling like a pimp, while the two ladies are trying to communicate with him, with all the deference and submission of two housewives.

Appealing to all the lower instincts, there is also a copious amount of gore, with several victims ending up like Cronenbergian magmas of flesh, and a rather inventive and very Cronenbergian way of despatching the monster at the end. The whole film has an oddly sedate pace, with several scenes seeing the crew members mere inches away from the monster with very little sense of urgency or danger. The story involves a weird foray into the desert planet's surface which almost looks like the director just spliced up some stolen footage from The Hill Has Eyes, hoping it would not jar with his space horror.

A real oddity which will appeal to true fans of genre, Forbidden World belongs to the psychedelic garbage wormhole of space.